With nowhere else to turn, the wealthy wandered to their summer homes. They arrived in bloodstained luxury cars with flat lolling tires and parked them quietly. Having expected this, I’d traveled with my daughter to these lakeside villas and built my own shack on the hill from mushy scorched timber. Of course the rich would survive—they possessed hundreds of sellable items and likely knew a thing or two about avoiding ugly areas.

Before offering my services, I gave each family a few days to settle in. At first I was received with wariness, distrust, even the dark eye of a shotgun muzzle. Soon though, I became a neighborhood commodity—cataclysm or no, the affluent needed a housekeeper. I scrubbed and swept and scoured while they eased back into their lives. The playground, though ash-drizzled and warped from heat, quickly rang with the shouting of children and the casual chit-chat of indulgent parents.

My daughter had trouble fitting in. For instance, she liked to pick up rats, which sent her friend Christopher away shrieking. The rich kids overstated and my girl understated. When she mentioned sleeping lightly, there were hordes of bedbugs freckling her sheets, and when she “had a bad day” she snuck out to throw paint-filled balloons at Christopher’s house. I wiped the blotches away for a fee, paid for by Christopher’s grandpa, a man rotund with excess. Unlike most maids I did not resent the well-endowed.

In fact, I pitied them. The Jacobsons paid me two extra bean cans to use a green cleaner they had stored in their shed, letting out a patronizing sigh, even though the climate had changed so much by this time that harmattan winds buffeted our pines. Mrs. Petersen, brittle as a brown leaf, over-explained positions of politicians long disintegrated and offered me a salted ham for listening. Although the townsfolk condescended, I accumulated more riches than any of them. My daughter and I began hunting for a hardwood house better suited to weathering the winter.

We got our opportunity when Christopher’s grandfather died of a heart attack and Christopher fled into the pickled wasteland to grieve. The corpse laid on hardwood for weeks undiscovered; I dragged the heavy rot away myself. Ms. Fallow begged to sell me the house, as she’d worked as a realtor before, and I allowed it, amused at her efforts to “spruce up the place” and hide the black decomposition stain of the grandfather with a throw carpet. One oily leg outline poked out and Ms. Fallow chirped, “That blotch is from an old broken washing machine. At least you get hardwood, right?”

I told her I’d sign the papers. Christopher never came back.

From our comfortable new abode, I let my daughter roam the wasteland. We shared the place only with the corpse stain and a cockroach with antennae long enough to pick up satellite signals. I swore to kill the roach once I realized how it had grown so fat, but I had bigger fish to fry—I needed friends. Although my cache supplies made me the richest man in town, the people treated me like I was the roach, expecting me to clean up their messes and scuttle away. I had a house to keep, but yearned to outgrow the title of housekeeper.

I managed to lure Mrs. Petersen over with the promise of hot tea. She clucked over her drink and told me that Mr. Petersen had started donating to African charities, and that she feared the Africans would grow dependent on us. I frowned because the USA was a smoking crater. She then lifted the throw carpet with the toe of her shoe, as if by instinct, and saw what lay beneath. After she left, the town downright ignored my invitations and I wallowed alone with the hardwood stain and the roach. I had failed some inscrutable test.

Over time I felt a strange kinship with the stain. Close-up I could discern a smudged nose and an orange grin. I could see where the chest had pressed into the lacquer, how one leg had curled under the gut. I lay on the stain as if to embrace it, comparing sizes, but the imprint dwarfed me. When my abstemious daughter returned one night I begged her to admire the hardwood. She told me that everyone had hardwood. But that was the beautiful point! With sad eyes, she whispered, “we’re in big trouble, aren’t we?” Coming from her, that meant we were fucking screwed. We were outsiders in a lawless town.

I set to work right away, bolting doors, nailing shut windows. Through a slit I swore I saw the silver tusk of a machete in the Jacobsons’ foyer. The Petersens owned a shotgun and everyone else drove powerful German cars. They would want my treasure come winter. If I feasted now, they could not wrest the supplies from my control; I could grow thick and mighty like a hibernating bear. Down my gullet went the ham, the cans, the salted fruit. I waited, waited, waited for movement. Down went the juice and the powdered milk. When I measured my swollen belly on the death stain it matched perfectly like an augury. And there crept the roach. Waiting, waiting, waiting for disaster. 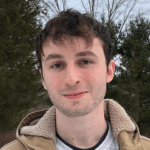 James Cato writes instead of doing laundry and his novel, Litter of the Waste, is in orbit. He has previous publications in Daily Science Fiction, The Molotov Cocktail, Gone Lawn, Litro, Atticus Review, and The Colored Lens, among others. He tweets humbly @the_sour_potato and his work lives on JamesCatoAuthor.com/fiction.