Once, in the past or future, but definitely not in the present, I worked as a transportation minister for a friendly dictator, whose name was neither Hitler, nor Stalin, nor Kim Jong-Un, but whose mustache was toothbrush, whose smile was sardonic to the point of nausea, and whose face was fat and round.

“Hey, you,” He told me in his usual brief, concise, terse, laconic and curt way. “I hate flying.

“Build me a new road from North to South so I can go on vacation by car.”

“Certainly, My Friend,” I said, because we called our bosses “My Friend” in our country, and they called us “Hey, you.” My Friend just abolished proskynesis. I missed that; we needed all the exercise we could get and the floors in the palace were as clean as any exercise mat.

“Your wish is my command,” I added. “It’s my honor and privilege to serve you.”

I was good with words and He knew it.

I assembled my underlings and told them: “Hey, you. I need a budget and schedule for a new road from North to South so that My Friend can go on vacation by car.”

“Your wish is our command, My Friend,” they said in unison. They were not as good with words as I. That is why they were my underlings. Their underlings were even worse.

The next day, I came back to My Friend with a budget of a 100 million gold pieces and a schedule of three years.

“One million and three months,” He said.

I called my deputy and told him, “Hey, you. Bring me an Aladdin lamp.”

Definitely not good with words.

He brought the lamp in 24 hours.

It was plastic and stained. Oh, joy! More reason that I needed a different deputy.

I dismissed him and rubbed the lamp, and a genie the size of my thumb came out. He was blue and green with nothing in between. No sense of aesthetic whatsoever.

Did he realize whom he was dealing with? I suppressed the urge to have him shot.

“Hey, you, I need to build a new road from North to South on a budget of a 100,000 gold pieces within a year so that My Friend can go on vacation by car. Can you do it?”

I thought and added, “Or else.”

“Or else” was normally understood in our country, but you never know what a genie understands.

“Deal. But you must call me ‘My Friend.’ Both words capitalized.”

The Genie built the road in 11 months on a budget of a 90,000 gold pieces. It was only one lane wide and no shoulders. But the Friend’s convoy managed to get to the South without any trouble.

The following day, the genie came. “My 10,000 gold pieces commission, my Friend.”

I wrote him a check.

“What are you going to do with the money?” I asked. “There is no room in your lamp for any cash. Do they have banks for genies?”

“I’ll buy a new lamp. I want solid gold. It was my life-time dream you know. A shiny new lamp. I mean, My Friend.”

They tried to grab him, but their hands went right through his body as if it were made out of smoke.

“Nice work, dude,” he said and disappeared inside his lamp.

I ordered it to be crushed under a tank, and so they did. I watched it turning into plastic dust. I slept like a baby that night, a leather bag with 10,000 gold pieces and a torn check under the mattress.

And then they called me and said that the Friend had turned into a plastic statue of himself, equipped with a detachable toothbrush mustache, as soon as his convoy hit the road back North. They blamed my road. After I worked so hard and delivered it under the budget and in record time? What happened to justice and morality in this country?

I took out a gun to shoot myself. But it turned into a plastic toy in my hands. So I sat in a rocking chair, waiting for the agents with the real guns, and sang “Ode to Joy” in my best German, which wasn’t so good. My Korean and Russian were a tad better, but they had no joy in Russia, let alone Korea.

The door opened, and I said, “Bang, bang” before they did.

This story originally appeared in the January 2019 issue of the McNeese Review. 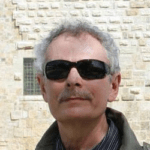 Mark Budman is a first-generation immigrant. His writing has appeared or is forthcoming in Catapult, Witness, Five Points, Guernica/PEN, American Scholar, Huffington Post,  Mississippi Review, Virginia Quarterly, and elsewhere. His novel My Life at First Try was published by Counterpoint Press. Learn more at MarkBudman.com.