Brother Gregor bent close to his work, his hands trembling as he lifted the taper. Candlelight flickered in the gloom; incense sticks pierced the fetid air. A drab grey light trickled through the tiny windows, illuminating the chalk circle drawn across the floorboards.

It was bitterly cold in the turret room.  Positioned high above the cloister, the monks had been using it as a storage space. A stiff breeze howled through the rafters, the air smelt of dust and ancient pigeons, the floorboards creaked at every footstep.

Not, by all accounts, the ideal place for a summoning.

The flame flared, seemed almost to snuff out, then caught, flashing a spectacular green. Brother Gregor allowed himself a sigh of relief, then moved to the fourth candle, chanting softly under his breath.

The forbidden parchment crackled at his feet, spotted with sweat and ancient wax. The eldritch symbols transcribed across it caught the candlelight in such a way that they seemed to twist and change in the air.

With a trembling hand, Brother Gregor lit the final candle.

The chalk circle began to glow. Tongues of eldritch flame crackled across the ceiling. Brother Gregor jumped back with a cry as smoke poured across the floor, extinguishing the candles and wrapping the room in an eye-watering mist.

In the midst of the swirling smoke arose a figure, thin and hunched. It was much smaller than Brother Gregor had expected– although, he supposed, demons were capable of taking any number of forms– he recalled an entity in The Book Of Bolem (a lesser demon of malice by the name of Helector) whose favoured form was a demonic flea, and was renowned for sucking men’s brains out through their spines. But the smallness of this particular demon seemed less deliberate than unavoidable. It was lanky and thin, with a shock of bright red hair and a narrow, unhappy face. Its lips were small, its cheeks were spotted with what Brother Gregor could only describe as Demonic Pustules.

“Gods!” the demon groaned, waving the smoke out of its eyes. It had a thin, reedy voice. “More bloody incense! Why does he always send me to the bloody incense summonings?” It fixed Brother Gregor with a petulant glare. “What are you looking at?” it snapped.

“T-the Great…Demonic Lord Warenlgameth?” asked Brother Gregor, in the voice of one who has poured over every forbidden text and ancient tomb, memorised the name of every lesser demon in existence, and is now overcome with a pressing uncertainty. “He of the…Drowning Valleys, Lord of Endless Nights, King of–”

“Yeah, nah, sorry,” the demon scratched a pimple. “He’s off right now. ‘Getting Coffee’ apparently, as if anyone takes two hours to make a blessed coffee. And as if he’ll remember to get me one, which he won’t.” The figure sighed, and seemed to reemerge from its cocoon of misery just long enough to shoot Brother Gregor a second glare. “You got a message?”

Brother Gregor squinted. The demon was wearing a loose striped shirt and baggy breeches, its straggly blond hair swept back with a not inconsiderable amount of grease. A small white square attached to its chest bore the legend: Hi! My Name Is Jeremy! followed beneath, in much smaller print, by Have A Damned Good Day!

The boy snorted, “Sure. Whatever man. Like he’d make me manager. I work for him.”

“Yeah, and lemme tell you; for a Lord of Endless wossname, he’s not even that impressive.”

“Certainly bloody treats me like a demon,” the boy (and now Brother Gregor felt certain this was a boy; not even the demonic lords themselves were that good at acting) adopted a low, rumbling voice, “’Jeremy, man the summoning circles. Jeremy, no portals to the Bahamas on your lunch break. Jeremy, what have I told you about calls on company time?’” he pulled a face, then stuffed his hand nonchalantly into the pockets of his trousers. “Teaches me to sell my soul for a bloody Ford Focus.”

“This…is what happens…when you make a deal with the Great Demonic Lord Warenlgameth?”

“Yeah, and between you’n me: the overtime is whack.” The boy leaned back, smirking slyly. “Why? You thinking of signing on? Cos’ I get some sweet employee benefits once I claim my first soul; we’re talking first dibs at the coffee machine, employee parking–”

Something rumbled, far back in the smoke.

“–What?” The boy glanced over his shoulder, listening to a voice Brother Gregor couldn’t hear. His face went red. “No, I’m not messing with the stupid— …I’m taking a summoning. Like You Asked.” Another pause. Jeremy went even redder. He turned back to Brother Gregor.

“You better be selling your soul right now man, or I’m toast.”

Brother Gregor stood in the darkness a moment, weighing his options; there were many things he was willing to sell for the price of eternal knowledge; many dark paths he was willing to walk. But the words ‘Employee Parking’ sent a shiver down his spine no dread curse had yet managed.

As the boy turned again, distracted, Brother Gregor lunged forward and extinguished the remaining candle. The boy vanished with a cut off “–oi!” and the room plunged into darkness.

Brother Gregor stood in the gloom for a long moment, breathing hard. Then he turned and very deliberately began to snuff the incense sticks. He’d bury them tomorrow, somewhere far away from here, and tell the Abbot the summoning had failed.

It was all well and good selling your soul, but some hells just weren’t worth the risk. 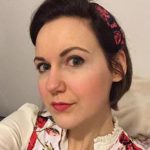 Georgia Cook is an illustrator and writer from London. She is the winner of the LISP 2020 Flash Fiction Prize, and has been shortlisted for the Bridport Prize and Reflex Fiction Award, among others. She has also written for numerous podcasts, webcomics and anthologies. She can be found on Twitter at @georgiacooked and on her website at GeorgiaCookWriter.com.