Jain and Stro have lived in the House for almost six decades, and considering they are the last two humans in existence, it’s not such a bad life. The soft bed has memorized the shape of their aging bodies. The wardrobe prints them clothes in any colors and patterns they like. The gleaming nanotube kitchen knows all their favorite foods.

It helps that they are still in love. They were young and terrified when they first met, fleeing the irradiated ruin of a city and the biomechanical hounds dispatched to hunt down any survivors. They traveled together for weeks, trying to reach the coast and the town that had once been there, marching through the endless dark.

It was only when the rock turned to slick oily mud, when they stumbled upon a whale carcass coated in squawking white gulls instead of maggots, when they saw, in the distance, the exoskeletal husk of a cargo ship — it was only then that they understood the sea was gone.

Stro began to weep, and Jain put her hand on his cheek. Their first kiss tasted like salt and rust.

“Some weather we’re having,” Stro says, which is the set-up to one of their little jokes.

“Some smalltalk we’re making,” Jain obliges, but she glances at the window out of habit.

As always, the hologram shows bright blue sky, puffy white clouds, a lemon-yellow sun. She knows it’s a lie. She remembers the dark sky they wandered under all those years ago, an atmosphere choked with ash.

“Wonder what it looks like now,” Stro says, reading her mind.

They both pause, as if the House might give its input. But it only responds to direct questions, and even then, it rarely gives straight answers. They have asked it many times, to no avail, why it chose to save them.

Jain and Stro spend half the day in the reading room, where hydroponic vines creep along the walls and a towering bookshelf belches out a haphazard assortment of novels and technical manuals and bibliographies. The House used to observe their preferred books and try to write new ones for them, but even though it can mimic anyone from Emily Bronte to Chinua Achebe to Octavia Butler, it can never tie together an ending.

Today, Jain is reading Gormenghast for the thousandth time, while Stro dozes in the pillowy chair across from her. As she gets older and older, as her hair silvers and thins and her bones find new ways to ache, she reads the same books more and more often. It feels like slipping into a comfortable groove.

On the third chapter, Stro slumps just so, hitting the airway angle that turns his snores to rolling thunder. She ignores it for another few pages. Then she rocks her chair, gathering momentum, and hauls to her feet to go fix the issue.

“I swear you’ve got a whole wind tunnel in there, Stro,” she says.

When she props the pillow under his head, she spots something on his scalp, a wobbly flap the color of old blood.

The House is not a hospital, but it’s able to confirm the horrible fear in the bottom of Jain’s gut. Radiation has caught up to Stro; the true wonder is that it took this long. But now things will move quickly. In a matter of weeks, there will be only one human left in existence.

Stro absorbs the news with a slow blink of his deep black eyes. “I guess I got my wish,” he says. “I always hoped it would be me first. So I didn’t have to miss you.” Tears are sliding down his wrinkled cheeks, how they slid down his smooth ones all those decades ago. “Sorry.”

“No worries,” Jain chokes. “You jerk.” She swallows the hard plastic lump in her throat. “What should we do, then? Before.”

Stro looks at the lying window, the cheery blue sky. “I want to go outside again,” he says.

The House considers their request for a day, two days, which Jain knows is an eternity to an AI. On the third day, the wardrobe prints them a pair of hazard suits. They help each other dress, following the House’s directions, checking the seals and filters. It’s slow work with shaky old fingers, but Stro is determined, and that makes Jain determined, too.

When they clomp out of the bedroom, there’s a new door waiting for them, a gleaming black slab that shudders open at their approach.

They go through holding hands.

It’s a wasteland, but not the one Jain remembers. The endless mud flat where the sea used to be is now interrupted by mountains, jagged teeth eating the horizon. The ground underfoot is baked brown rock. The sky is clear of ash, which she knows, in the back of her mind, is impossible.

Almost as impossible as the massive, seething red sun.

“Red giant,” Stro says. “Makes no sense, Jain.” He turns to look at her. “That’s not meant to happen for another five billion years.”

Jain feels a tightening in her ribcage. They both turn to look back at the House, the featureless vantablack bubble that has both kept them safe for the past six decades and somehow hurtled them five billion years forward in time.

Part of the bubble turns translucent, revealing its innards: looms for carbohydrate synthesis, moisture farms for water, reactor cores to power them. Two small glass cylinders rise from the machinery. Each contains a bobbing embryo. 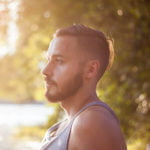 Rich Larson was born in Galmi, Niger, has lived in Spain and Czech Republic, and currently writes from Montreal, Canada. He is the author of the novels Ymir and Annex, as well as the collection Tomorrow Factory. His fiction has appeared in over a dozen languages, including Polish, Italian, Romanian, and Japanese, and his translated collection La Fabrique des lendemains won the Grand Prix de L’Imaginaire. His short story “Ice” was adapted into an Emmy-winning episode of LOVE DEATH + ROBOTS. Find free reads and support his work at patreon.com/richlarson.