“You,” the Hell-mage said, “are deliberately being difficult.”

“Apocalypse.  A-poc-al-ypse.”  He sounded the word out sarcastically.  “Are you taking this in?”

“I wrote it down, sir,” I soothed. I hadn’t.  I’d doodled a flock of tiny hearts streaming through a half-opened doorway.  My eyes burned from an all-night binge of season four, Fated For Love.  A mug of coffee steamed at my elbow.

There was a whine in the man’s voice.  He’d been on hold for the full hour since the office opened.  We get a lot of calls first thing in the morning.  The crazies are always up early and a lot of our callers are dream-prophets.

“Any one of which could herald the end of life as we know it,” the Hell-mage hissed.  He had an intense, whispery way of talking.

“We take a log of everything, sir.  We just need your…”

I reached for the coffee, tilting the phone away from my ear as he ranted.  I caught the occasional phrase: end of the world, absolute doom, horror beyond imagining, carnage on a biblical scale.  I studied my nails, wishing I could get half that passionate about anything.

When he finally paused, I pressed the phone back against my ear and swallowed the coffee.

The pause and audible gulp seemed to mollify him.

“Now are you taking this seriously?” he asked, smugly.

“Absolutely,” I said, sarcasm dripping from my tone.  “We need to start with your name and where you studied…”

“No!” he shouted.  “No log.  Transfer me on to someone who has a flicker of mage talent.”

I skimmed the office – desk after desk of dead-eyed gits like me.  Everyone was slumped over their coffees.  Most were rolling their eyes.

“This is the Department of Arcane Affairs?”  His confidence wobbled. I pictured him fumbling through papers for what number he’d dialled.

I grinned evilly, soooo tempted to pretend this was the Department of Zombified Household Pets.

“Yes sir,” I soothed.  “Every call goes into a…”  I rolled my eyes and lied: “Detailed report, which is read by the folk upstairs.”

I heard his quick huff of relief. “Transfer me upstairs.”

“They don’t come in this early, sir.”

“It’s ten-fifteen,” he hissed.  He was using his sinister voice again.

“The call gets logged, then put in a detailed report that is studied very carefully, sir.  If this situation is as dire as you report, someone will probably call you back.”

My gaze flicked to the screen on my phone.  I was way over time with this call.  My boss, a damaged ex-mage with a serious power complex, was giving me the evil eye.  In a moment or two he would drift over and spot the doodles on the intake page.

I hastily changed my tone: “You’ve told me how worried you are, sir.”

“You don’t sound worried,” he whined.

“I’m not authorised to worry, sir.  I just log the calls.”

“Your incompetence could spell the end of this world.”

“That’s above my pay-grade too, sir.”

“Not yet, sir.  The form starts with your name.”

“The world is going to end!” He shouted.

I’m pretty good at lifting the phone away from my ear before someone loses their shit.  The number of times a day I hear that phrase.

“Are you listening?” he whined.

I wasn’t.  My gaze had snagged on my calendar.  We’d been pressured to buy them as a nod to the Retired Heroes Fund.  The image for April was bulging muscles and sleek black tights.  My boss was standing over me, glaring.  Hopefully he thought I was staring into the space, not into the groin of Dark Pulsar.

The Hell-mage made a strangled, squeaking noise.

I lifted sad eyes to my boss.

“Couldn’t get his name, poor soul.”

Boss shrugged, gaze already distant. “He may call back.” 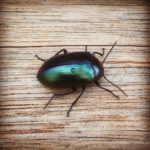 Nicole Walsh is a cat enthusiast from the east coast of Australia who loves fern gardens and long dresses. She writes short stories and novel-length speculative fiction and urban fantasy that spans from a little bit dark, a little bit amusing through to a little bit steamy. Visit Nicole at NicoleWalshAuthor.com and on Facebook.