Nothing more than a few meters of lake, smooth but for the passage of her yellow kayak. The smoke hid the mountains on either side of the lake valley. Over the course of the several hours they had been out on the water, the wildfire smoke had sunk to valley bottom, and filled it.

“Chris?” Colette called to her sister, “Where are you?”

There was no answer.

Colette didn’t see any further sign of the fish or duck that had been splashing and which she had been trying to follow.

The smoke from burning forest, a depressingly common summer phenomena in British Columbia, was making Colette’s eyes sting. She had already washed them with lake water several times this afternoon.

“Christina?” she called again. She listened hard, and thought she could hear a light sprinkling noise far ahead to her right hand side.

She turned her kayak with a few easy strokes and paddled towards the sound.

Chris and Colette and Mike, Chris’s dog, who refused to be left behind on shore, had only seen one other watercraft underway. A small sail boat had puttered past using its small motor.

Rumor said there was a monster in the lake. The monster was generally depicted on postcards and t-shirts as a hydrodynamically challenged smiling green serpent.

One of Colette’s past boyfriends was convinced the creature had once stalked him.

“She smelled really, really bad, rotten-fishy” he said, “like a seal colony, you know? And she had big purple eyes.”

This from a guy who believed world peace would be achieved if all the heads of state came together and shared a giant bong. Colette took his story with a truckload of salt.

Colette scooped another handful of water and threw it at her eyes. The itching was getting worse; her eyes were starting to tear.

Colette paddled faster. “Chris, wait up!” She called. “Where are you?”

There was no noise but the splash and trickle from Colette’s paddling.

Last night Chris confided, “I need money, Colette. My husband… well, money is important to him.”

“Are you saying he would leave you if you didn’t have money?”

“I’m saying, when we got married, I could afford things for both of us that I can’t now. I want to buy nice things for him. For us.”

Chris said, “He scares me sometimes. Sometimes he looks at me like… like he’s just calculating how much he could get for me or something.” She laughed nervously. “Or he’s wondering what toppings he wants on his next pizza. I dunno.

“We took out life insurance a couple of months ago. We both got it, naming each other as benefactors, but… it kinda creeped me out.”

Colette paddled. She didn’t think Chris’s husband was really a threat. Chris had a tendency to exaggerate and joke around. For example…

Christina was probably being quiet on purpose.

Colette thought she heard a slosh behind her, but when she turned she couldn’t see anything. She wiped at her eyes.

She listened. Was that a motor off in the distance? The sailboat again, or a different boat?

His happy barking erupted from the smoke to the left.

Colette paddled rapidly towards the sound. It stopped. She kept going. She heard another splash behind her. Gliding on as she looked over her shoulder, she saw a ring of expanding waves radiating perhaps ten feet from her prow.

Darn fish, she thought, and then something thumped into the boat on the right side, underwater, jolting the kayak. It rocked, but did not tip over.

“What was that?” Colette asked the air, gripping her paddle tighter and looked around her. “A rock?” She let herself drift for a few moments. “A log?”

The kayak didn’t seem to be damaged, she wasn’t sinking.

“Okay,” she said. “Chris, watch out, I think there are rocks around he…” this time she hit something on the boat’s left side.

Colette turned the kayak and circled where she thought the rock should be. Peering into the grey water through streaming eyes, she still couldn’t see anything.

“Chris? I can’t see properly… I just ran into another rock. Chris?”

She waited. There was a churning, lapping noise, somewhere ahead.

“Christina? Are you coming?” Not a word.

Colette paddled slowly now. She expected to see the shore emerge from the smoke, as most rocks she knew were near shore. It wasn’t happening.

Maybe she was going the wrong way.

She could hear a motor again.

Hesitatingly, Colette paddled on. She thought she heard a paddle sprinkle behind, and the thump of a paddle against the body of a kayak. She turned from her line and made towards it. Then there was another splash, in another direction and she turned again.

She paddled on. She was getting worried. The lake was over a hundred kilometers long. It might take quite some time to blunder into land.

She paddled and drifted and peered.

She didn’t know what time it was, but it would eventually get dark.

Colette did NOT want to spend the night on the lake. If only the smoke would lift. It had to sometime, but when? Smoke could last weeks.

There was another sound behind her, and she turned and thought she saw…something… moving past. It was a dim sense of movement more than anything else. Colette rubbed at her eyes.

Don’t panic, she told herself.

In the distance. Mike burst into barking again. This barking did not seem happy.

“Chris!” Colette yelled, “Are you alright?!” The barking stopped suddenly, mid-bark. There was a large splash, the sound of which echoed around Colette. Did Mike jump into the water? “Chris?!”

The noise of the motor accelerated away.

Colette paddled and paddled. There were no further sounds, except those she made herself. She was starting to feel sick to her stomach. She didn’t know if it was the smoke or the tension of being lost on the lake. She wished Christina would say something. She wished Mike would bark again.

Eventually, she saw a shoreline, and gratefully paddled for it. She dragged herself and kayak up on a small beach. Colette exhaled with relief when she saw a road nearby.

She flipped her kayak upside down on the sand. There were two indentations, one on each side of the bottom. They were very similar in size and shape. They may have been made by bumping against a rounded rock, or… or… the word snout made its way into Colette’s mind.

She leaned closer to inspect the dents. There was a distinct fishy smell.

What was out there? Where was her sister?

Collette shuddered, and on shaky legs, ran for the road. 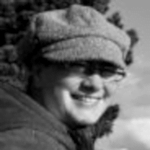 K. MacMichael writes and lives in a small town in western Canada's Okanagan Valley. She has had over twenty short works published, including with Cirque, antilang, and Arachne Press.  For more information please visit KFMacMichael.wordpress.com.