It was half-past twelve when the Thing slid into my back seat.

A fellow sees all kinds in this game, I don’t judge. Once I get notice that their credit card has cleared, why in the world should I?

This would be my first extraterrestrial, though.

I gave it my name, like you do, so that they can be sure they’re in the right car, and I waited for it to respond, because that’s how it works. But the Thing didn’t say anything. Not with sounds, anyway.

Instead, something entered my mind, something long and wriggling and soft and sinewy, like an invisible tongue or, no, a tentacle, and what it told my brain was the name I’d read on my phone when I had accepted the ride. Which was a collection of letters I couldn’t have pronounced anyway. Some of them I didn’t even recognize.

There was a destination on my phone’s screen, but as I didn’t know where it was, I asked the Thing where it wanted to go. If it intended to tell me to take it to my leader, well, let me tell you, I’d probably have to increase the fee. Our nation’s capitol is a journey of some distance.

But it told me to just drive, so we started off.

Ride-share’s a tricky business if you want to make it profitable. You keep at it all day, like any job, only more so, if you get my drift. And since I gotta pay Audrey her alimony and keep a shed over my own head, I do. Round the clock.

It’s the wear on your car that gets to you. New tires quarterly, regular service, excess miles on the engine and transmission, and it’s a fool who’d disregard the price of oil and gasoline. But in truth, the wear is on the mind as much as the car, fretting about this stuff. It adds up, it does.

The profit’s all in the tips, as I see it. This is why I provide my passengers with whatever creature comforts I can fit into a sedan. A selection of popular magazines in a variety of languages. Individually wrapped mints and hard candy. I keep a chilled bottle of water and some hand-sanitizer back there so my passenger feels safe and comfortable. Courtesy pays off in the end, that’s my credo.

Though in this instance, I was less confident. The gelatinous Thing back there seemed to have no orifices for the water or hands for the sanitizer. I suppose the eyestalks might’ve allowed it to enjoy a magazine if it was a reader.

A lot of drivers, they don’t go out after a certain hour. Think it’s risky maybe, or want to get home to family, I guess. Me, I enjoy being behind the wheel at night, and I get to visit places I might never otherwise have ventured.

But I do like to know where I’m headed. That way I can program it into my phone to assist with directions. So again I asked.

The tentacle made a word, and that word was a place, even if I didn’t know the place. But it told me the direction I needed to go was out of town and to the north, so I bypassed the freeway. It’s the long way, but you avoid the tolls by that route.

On the lengthy trips, I find some friendly banter goes a long way toward making a passenger feel generous, so I asked the Thing what brought it to town. I don’t read the papers much, but if anyone on Earth had ever credibly documented an alien encounter, I hadn’t heard about it. This might be a big deal.

The tentacle in my head told me where it was from, a place far, far away. Not a name I knew, but that hardly surprised me. I don’t get a lot of vacation time, not even when I’m not paying alimony, so my idea of relaxation usually involves TV and a ballgame and a beer. If I could afford it, I’d like to think I’d get around more. Broadens the mind they say.

So why’s the Thing so far from home I asked, and it told me about a job here; mining or something like that, out under the dam. Apparently it, and others like it, were sending home some element that we had in plenty, but that his home needed and was missing.

They liked to keep it quiet, these Things, but they’d been here for some time, keeping whatever passed for their heads down and laboring vigorously. An American success story, that’s what I’d call it.

But the Thing, tentacle in my head, told me it was ready to go home, and that you can’t know loneliness until home’s literally light years away. Me, I don’t know about that. I hadn’t had what you’d call a loved one in a while and I’m getting by, but I supposed I could see its point.

Were there any little Things at home? I wondered. Perhaps a spousal Thing? I was careful to use non-binary terms, as I detected no indication of gender, but from what I gathered through the tentacle its world didn’t exactly work like that.

There was more of a collective intelligence in which all Things bloomed and supported one another via what might be called psychic means, if you can credit that sort of thing. I just nodded and provided a sympathetic ear, as the expression goes. I’m not much for your mystical hoodoo.

We whiled away the ride like that for a bit, until we abandoned the main road for a smaller one, at which point I felt it wise to devote more attention to the way in front of me. I have too often seen animals dart out in the dark and I’d hate to hurt a defenseless creature almost as much as I would regret the damage to my car.

And, after a short period, we were on a rutted washboard dirt road that had me driving at a stroll rather than risk my suspension, and for which my concentration was even more necessary. I didn’t mention it because it’s not done, to trouble a passenger with such matters, but I reflected that this tip had best be a whopper.

The Thing advised me to turn at the next left. I didn’t see any left, and had to stop and reverse when I’d passed it. Fortunately there was no one on the road behind me. From what I could see, there was no one around for a good number of miles.

The “left” it had mentioned was just a small gap in the scrubby trees, barely enough space for my car, which was for sure going to require a wash after this fare. The branches weren’t quite scraping the sides, but there’d better be an area wide enough for me to turn around when we got to our destination, wherever that might be.

Then there was a flash of light that I smelled rather than saw, and the view outside my windows became just as suddenly black and empty and endless, cut only by the odd shapeless dollop of audible color, and I don’t mind saying the whole thing had me wigged. The tentacle told me not to worry, so I tried not to, although this sure seemed like something I should worry about. I had the distinct impression I was no longer on Earth, and that’s nervous-making for a regular joe like me.

Casting an eye at the gas gauge, I asked how much farther we’d be traveling. The response somehow came as both forever and just a minute, so I assessed that I had no option but to sit back against my beaded seat cover and let whatever happened happen.

As an experiment, I removed my foot from the accelerator. I couldn’t feel any difference, but since I hadn’t sensed movement at all since we entered this bottomless void and had no sense of perspective from passing landscape, because there wasn’t any, I couldn’t know if we were slowing or even stopped. So I compromised and gave it just a little gas. Wherever we were headed had better have a good service station, that about described my position.

We entered a particularly noisy and spectacular shade of purple and we were suddenly back in what you could call a world, I guess. But it wasn’t my world.

The sky was the yellow of corny-dog mustard and the road before me, if you could call it that, appeared to be entirely liquid. I expressed concern for my engine block as I’d lost one a couple of years earlier after driving into a deceptively deep puddle, and the repairs had been costly, let me tell you. The Thing assured me that my car was safe, and I realized quickly that we were hovering over the brackish water “road,” if it was water. Gotta say, the ride was remarkably smooth.

In the distance a large shape rose up, dripping out of the liquid, and some other smaller shapes squeezed out from that shape, and I realized soon enough that the smaller shapes were more Things like my passenger. I felt a tickle from the tentacle in my brain, squeezing some juices from one gland or another, and I felt myself become happy for the Thing. It’s nice to have others who care for you.

At that moment, I resolved to find myself someone who would similarly care for me just as soon as I could, upon my return home. Maybe I should call Audrey. Maybe I’d join a website or go to bars. I hear women like book clubs. I’d read a book under the right circumstances.

Without my control, the car pulled to a still-floating stop beside the enthusiastically quivering Things, and my back door opened as my passenger jellied out.

I smiled at it and lowered my window, and said that I hoped I could count on it for a good review. The phantom tentacle, even as it disentangled from my mind, assured me that I’d get five stars and a tip I would most appreciate.

And then I was back into the black void, and almost as suddenly back on the rutted road, and I even picked up a passenger on my way back to the city, which helps on the expenses.

I also found that even back home my car rode just a few inches off of the ground, and my fuel gauge never dropped again, and the exterior seemed to sluice off any mud or dirt on its own. All of which, I need hardly tell you, is of immense benefit in my business.

The following morning, when the men in the black suits came to me and asked about my passenger from the night before, the one some witness claimed to have seen oozing into my car, I stroked my chin and I told them, no, no, I hadn’t noticed a thing unusual about it. Nope.

This story previously appeared in 96th of October, 2021. 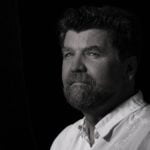 Pete Barnstrom is an award-winning screenwriter and filmmaker whose projects have played at theaters and film festivals all over the world. He's shot documentaries in Greenland for the National Science Foundation, made movies with the Blair Witch guys (not that one), and seen one of his films screened at the Smithsonian. His experimental short films earned a grant from the Artist Foundation, and Amazon Studios bought a family film screenplay from him. He lives quietly in Texas and loudly elsewhere. You can find him on Twitter at @MistahPete and on Instagram at mistah.pete.