Rule #1.  One bullet; at the proper time in history.

Rules separated me from them; a lighthouse pillar amongst the black sea of anarchy.

London.  September 29th 1888.  Midnight neared.  The double event would take place before dawn.  I had been tailing Elizabeth Stride since she left her common lodging house.  She was beautiful.  Even though her eyes had not been dry in years.  Even through the crooked lens of alcohol which veiled her like a confessional, I understood why any man would fall for her.  Or kill for her.

Mary Ann Nichols was purported to be the first.  Annie Chapman the second.  But it was Elizabeth Stride and Catherine Eddowes who stoked the daemon’s appetite.  Both murdered on the same night, within one hour of each other.  The witching hour was the capstone of The Ripper’s madness.  That hour would be tonight.

The night he would betray his identity.

He took his time though.  Made me watch her whore herself out to rabble.  Watch men spit on her when they were done.  Men who didn’t even ask her name.  Threw their shillings to the ground where on her hands and knees she scavenged for her dross money, exalted by the half-mocking gleams of gaslights.  Like a beggar.  But she was worse off.  Beggars subsist on mercy, and nothing is taken from them.  These men weren’t merciful.  They were machines.  And all the streets were a machine for pigs.  Yet I had to endure.  It was the price she and I had to pay, to see The Ripper rise from Hell; his words.

The convicted killers were easy.

They all had names, and names had histories.  The killers themselves lived lives on the grid, even those who derided it.  They were born in municipal hospitals, attended law schools, served prison sentences; left trails that are easily followed.

They were all thirteen when I killed them.  All no longer children.  Manson decided that.  He was the first.  November 12th 1934, Cincinnati General Hospital.  I stood over the infant.  He hadn’t even been named yet.  Even my gun was named.

I couldn’t kill a child.

I wasn’t a butcher, just their hunter.

I slipped back once the seed had begun to rot.  His first run-ins with the law would land him in Boys Town.  Four days later, when he escaped, he would have committed two armed robberies.  He was only thirteen.  But it was the beginning.

I was waiting.  With one bullet, at the proper time in history.  They were after pain, anarchy, chaos … God knows what?  Hell, maybe they just wanted to be known.  But their footprints lead over corpses, improperly buried.  I was a surgeon, with a gunpowdered scalpel … removing cancer.  Why a gun?  There is something in their blood; fragments of the monsters’ soul.  I didn’t want them touching my skin.

Sharon Tate lived, but never became the actress she dreamed.  Her divorce from Roman Polanski caused her to retire from the industry.  She married again.  Had kids.  Knew grey hair.  I suppose may have even been happy.  I don’t know.

I had work to do.

In America alone there once were 198 ‘notable’ convicted serial killers; beginning with The Harpe Brothers in the late 1790’s.  In recorded England forty five.  Luis Alfredo Garavito slew at least 138 himself, possibly 400 in South America; mostly children.  Do you think I felt any remorse when his thirteen year old frame fell silent?

Does a writer feel guilty for hammering ink on a white page?

Cowards hunt for sport, take breaks to sip their tea.  Guardians hunt to silence the mad engines gutting the innocent.  Guardians sleep when the war-cast beast is dead.  I don’t know how long I hunted the known killers of history; I existed outside of time.  My hands, my pockets, could only carry so many pocket-watches.  I lost my own somewhere beneath another man’s moonlight.  But the body is the one immutable clock.  It must have been years.

The identified killers, the convicted bastards, were easy prey.  It was the unsolved cases, the next twenty years, which tested the mettle of my soul.  They exist out of time and history as well.  Like a mythical storm that lurches at one point in history, never to return.  Ghosts don’t have shadows, or reflections.  They don’t leave footprints or even wear boots.  No ink records their histories.

The principles of time travel tortured me, forced me to watch her die.  I wished there were alternatives.  I racked my own mind to no avail to unmask the identities of the faceless killers.  But Jack did not walk the earth before or after the White Chapel murders.  It was as if a lucifer had spawned a dying demon for the grisly acts, and the wind thereafter scattered its remains.  There were no sunlit streets where I could find The Ripper.  Only five nights under a killing moon which proved he existed.  Only five massacred bodies soldering him to reality.

I could not save them … until I watched them die.

I could not save them until their bodies betrayed the identity of their killers.

To men, time is the Thames and mortality a ball and chain.  Time thus becomes a depth they are pulled down and roiled within.  A yoke nearly as heavy as six feet of earthen ceiling.  To me, time was a blank canvas, and my iron a brush.

But all art has a cost.

I had to watch Elizabeth Stride die.  Without her corpse, or the others, to summon the Ripper from the ghoul-haunted London fog, I could not paint by gunpowder.  Do you think I relished in the sound of butchery?  Think you that the blade’s hacking moans were music to my ears?  Do you think that my nightmares … ‘My heart was fashioned to be susceptible of love and sympathy; and when wrenched by the witness of misery, of vice and hatred it did not endure the violence of the change without torture such as you cannot even imagine.’  If only such memories were as mutable as time.

In the end, my art would allow Stride to live for five more years, until she drank herself to death; passing away in an unconscious stupor, clothed and in bed, far from the cobbled streets which once bore her naked and desecrated frame.  Even this tragedy racked my heart and I eventually removed her from London and the sullen rookery of White Chapel altogether.  She and her sisters in murder I eventually placed in monasteries where they lived lives free of alcohol and personal tragedy.  Such is the only history they will ever recall.

I would that I was so fortunate.

Eddowes’ death that night was the work of a madman.  I had trailed him from Stride’s body, and acted as soon as he proved himself worthy of the name Ripper.  She had smiled to earn her coin, the best gutter-torn smile a whore is able, but it was already broken; long ago by the streets.  Even in ruin it was angelic.  There was a time I went back to see what that smile once looked like.  She was ten, and it was her birthday.  It made me cry.  But that was a long time ago, and I have a tale to finish.

The Ripper’s frame fell to the earth beside her that night, a bullet lodged in his head.  My hatred fired three more rounds into his corpse.  I had anticipated discovering some form of identification or at the very least a clue as to his current boarding or flat.  The devil was nameless.  His hat bore no label or hatter’s signature; no maker claimed his top coat and no cobbler’s mark exalted his shoes.  His visage was unfamiliar to me, and though I claimed a picture by way of camera, no modern database could match him to any photograph of antiquity.

I was required to travel back, witness the savage acts again and, with indolent ire, watch him walk away, free.  Descended into sewers.  Steal through dark alleyways.  Tarry in shadow-corners for clouds to cover the moon until at last he betrayed himself by returning home.  Even butcher’s need a pillow.  Samuel F. Langham, coroner for the City of London.  I killed him.  Again.  That night; then and there, even though to do so was meaningless to time and satisfied only my hatred.  I stared at his lifeless body as he lay at my feet, in the luxury of his own home, warmed by the comforts of a kindled hearth and surrounded by his bottled collection of female organs, dead, but still dignified by the painlessness of a death ushered by the weapon of a gentleman.  He deserved less.  It was then that I saw it.  Protruding from the inner folds of his top coat.  The Ripper blade.  I still had to witness his movements during the previous White Chapel Murders to confirm he acted alone, and then, silence his fledgling mind before it dared dream of murder.

But that could wait.

After all, I had all the time in the world.

That night the great Jack the Ripper was reduced to a nameless husk, like his prey; smiling a Glasgow smile, naked, butchered and alone.  All alone, with hateful cobblestones comforting his skin.

I had to watch the murders, to find their murderers, and after I killed them once I took their own bloody weapons and visited them as children.  The Ripper was the first.  The Black Dahlia Murderer second.  The Mad Butcher of Kingsbury Run third.  The Zodiac Killer fourth.  But for what purpose shall I list them, or their weapons, when it is sufficient to say these were the men and women I took great pleasure in silencing.  Killing them more times than history required.  I painted until my pistol was forgotten, and the shrieking voice of butchers my muse.  I painted beyond my canvas; until rules bound my artistry.  I had to throw them out to keep a brush in hand.

But one can’t paint forever.

I was older than I thought I would be when the knock came upon my door.  When I saw myself on the other side of the keyhole.  The wrinkles bespoke of the years taken to make the decision, but then again I wasn’t surprised.  It wasn’t always easy to pull the trigger.  I never doubted that I would come in the end.  I even knew why.  There was only one thing I didn’t know.

Which weapon had I brought? 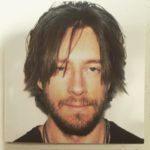 nikki.ink has published fiction in Penumbra Magazine, poetry in Sine Cera and has been a featured writer for Salt Lake City Public Library's Author In The House series. He writes and performs with Simple Simple, a storytelling troupe. nikki also runs his own original fiction podcast - Stray Country. Find out more about him and his work at Stray Country. Follow nikki.ink on Instagram at nikki.ink.