The last time I saw Jude before he disappeared, we were in the school toilets after IT class, two weeks before our high school finals. That was when he showed it to me.

“Hey, Danny, what are those red dots called people get on their skin?” Jude asked me. “You know, those ones Frankie’s mom’s got.”

“I don’t know. Red moles or something. But I think only old people get ’em,” I said, and pressed the glitchy soap dispenser: a grinding whir, an ice-cream white swirl wet on my hand. He was up close to a mirror, his tangle of copper-brown dreads pulled back as he examined his forehead.

“Can’t be that, then. What you think this is?” Jude stepped closer, moving his hand out of the way. A cherry-red spot glistened under the fluorescent lights.

“Got no idea. A beauty spot?” It was all I could come up with at the time. “Acne?” It wasn’t that either. Something was weird about it. The way it caught the light was eerie, its pigmentation and texture strangely fluid, like a drop of dark blood pressed against cut glass. I’m sure Jude saw the concern on my face.

“I gotta go.” His hazel eyes wet, Jude left the toilets. I visited his address the next day, but no one was there. The driveway was empty, the house bare inside. Every time I checked his Gametag, he was offline, his avatar blinking back at me, silently oblivious. His social media accounts blank. As if God wiped Jude out of existence.

The spots started cropping up everywhere, on people of all ages. Experts around the world offered theories; the main one being spreading vitiligo, but they couldn’t explain why the spots weren’t white. They forgot we all look the same inside. It would be proven later they were thinking in the wrong dimensions, unaware of the complex layers that make us what we are.

A week after Jude went missing, I walked my little brother Zane back home like always. He was on his Gameboy again. “Quit it, Zane, we need to cross the road.” Zane placed it in his pocket and held my hand.

We arrived home and I left him in front of our old HD TV to watch one of his favorite interactive shows; he asked if I could fix the broken pixels. “I’ll speak to Mom again about replacing the set,” I said, but knew she couldn’t afford it on a nursing wage. I went to my room to study.

My eyes tired, I closed my laptop, grabbed a sheet of paper, and wrote down what I could remember about DNA and CAD and…

I was scrawling my notes when my pencil snapped. “What the?” My eye snagged on something center-left of the cream-white paper. There was a blurry pinprick, a funeral-black mark. I brushed my palm over it, but felt nothing. No hole or tear. What’s going on? I must be tired. The stress of the exams. Moving the paper to one side, I opened a textbook. Only later did I realize the spot was the exact same color as my desktop’s surface.

People had started to post selfies on social media by then, showing the strange spots that appeared on all parts of the body. Doctors still couldn’t explain them and governments around the world called for calm. Some people had dark spots, others brighter dots, but there were no other symptoms. Some said they were beauty spots or marks from God, showing them off with pride, tagging them with multiple hashtags. But then the same people started to disappear. With everyone so focused on themselves, most people didn’t notice the same marks were cropping up on inanimate objects too.

Two days before my first exam I found it on the back of my right hand. I was washing my hands when my breath caught. I scrubbed hard as I could, but it wouldn’t clean off.

Shaking, I wanted to hide away, and understood how Jude had felt. He must have known the spot was a sign of something more sinister.

Sweating cold, I couldn’t stop scratching, examining it. It looked exactly like Jude’s did. Blood red and sliced flat. I did some online research—they weren’t angiomas like Frank’s mom had, now I knew their name. And there was no raise to it like the spots kids got around exam period. I thought I must have caught it off Jude.

But the spots did not discriminate. People far and wide, even in isolated communities, were finding them. All colors, creeds, and nationalities affected as religious buildings began to overflow.

Wearing thick gloves, I walked Zane home from school, thinking I hadn’t done enough exam prep. Above us, the sky was pale, as if some of its color had been washed out. “Zane! What did Mum say about playing that when crossing the road?” I snapped, and Zane dropped the console to the concrete.

“Sorry, Zane. I’m just stressed with everything that’s going on.”

Zane picked it up, his eyes wet. “It’s broken, Danny.”

I crouched down and took off my glove. “Let me take a look at that for you, little man.” The LCD screen had spidery cracks across it and a defective pixel at the point of impact, but it still illuminated. “Don’t worry. I’ll get it repaired for you.” I turned to him and saw his gaze locked on my right hand.

Young kids have that wonder with the world, but they also have honesty that cuts through it: “It’s a dead spot like on our TV.”

My face reflected in the console’s cracked screen. I stared at the colors leaking like a shattered rainbow, at the defective pigment on the back of my shaking hand and knew what we were. Nothing but layered pixels in a computer-simulated world. I looked up to a loaded sky, searching for the gods that designed us.

This story originally appeared in July 2019 in Thrilling Words. 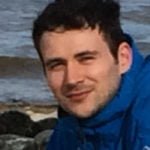 L. P. Melling currently writes from the East of England after academia and his legal career took him around the UK. He is a Writers of the Future finalist, with his short fiction appearing in ASM, DreamForge, and the Best of Anthology: The Future Looms. When not writing, he works for a legal charity in London that advises and supports victims of crime. Follow him on Twitter @l_lpmelling or at LPMelling.wordpress.com.