When I touched down, returned triumphant from my mission—a crucial survey of the Cerul system, hundreds of light-years away—they cheered, called me a hero.  I shook hands with the president a day later, during an official ceremony held in my honor.  He pinned a shiny gold medal to my chest and whispered his gratitude in my ear, while millions of eager onlookers jostled one another, hoping to catch a glimpse of me, of history.  And back in my hometown, they celebrated their local champion with a ticker tape parade.  As I got charioted down the main boulevard, a street they’d seen fit to rename after me, I smiled and waved to the crowds that had gathered on either side, buzzing with excitement and pride over the astonishing feat of one of their own.  I stood as a symbol of hope to a planet, a people on the brink.  We needed a new home, and against tremendous odds, I’d found one for us.

At least, that’s how I’d always imagined it would happen.

Instead, my ship crash-landed on your tiny blue marble, with no prospect of repair.  They’d anticipated the possibility of a wreck, certainly—our scientists, thorough vattolc, they’d planned for every contingency.  But they’d overestimated your technology, taking your movies and television programs, your science fiction, for news transmissions.  We don’t have films or TV shows, at least none like yours, where I live.  Lived.  And really, why would anyone choose to broadcast such usyug?  Given those naive assumptions, you might begin to grasp my surprise, my utter horror, when I learned warp drive and cold fusion reactors existed only as figments of your collective imagination, so many pixels on a plastic LCD screen.  Earth—fucking prehistoric, to borrow one of your more colorful expressions.

I shouldn’t complain, I suppose.  I understood the stakes and the risks.  I accepted them, even embraced them.  Our sun would die in a few short generations, they’d said, and one of us had to make the perilous trek.  I knew my ship might slam into some uncharted comet or asteroid, the hibernation unit might fail, or the heat shields might collapse on re-entry.  I knew a thousand ways I might die, might not survive to see my home and family again.  But like so many others, I volunteered anyway, the privilege mine.  I just hadn’t counted on subsisting like this, trapped here, waiting—weeks, months, years—for a rescue that likely will never come.  One chance at this, they’d warned, more than once.

After I’d realized the hopelessness of my situation, I buried my past with the remains of my damaged craft and tried as best as I could to disappear, blend in with you.  Wasn’t hard, I discovered.  We look like you, at least in any way you could see with your oioc.  So unless you happen to tote around an X-ray machine or CT scanner, you would never know you’d met an uryuom if you bumped into me in line at the supermarket or Starbucks.  And though your idioms trip me up on occasion, I mastered the basics of Omtryuus readily enough.  They drilled me on your language as part of my training, and compared with mine, it’s quite simplistic, something even a child—even my cem—could understand.

My boy, he was about five of your years old when I launched, nearly sixteen now, and I still miss him, wonder about the kind of num he’s becoming.  I still miss my quyuho too, maybe more than anything.  When I look up into the night sky, thinking of my homeworld, sometimes I can almost feel her gazing back at me, her bright, warm smile twinkling like some distant star.  The sensation never lasts, though, and I’m always left alone in the dark, a gaping emptiness inside me.  Wyumgac Huvyuac Nuzyunac Bollasecac Samsgugel, that’s my given name, by the way.  But just call me Sam.  Everyone here does. 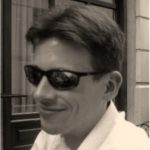 J.D. Kotzman lives in the Washington, D.C., area and works in the health policy field.  His fiction has appeared or is forthcoming in The Chronos Chronicles (a project of Indie Authors Press), Dark Lane Anthology, Ink Stains (a project of Dark Alley Press), Shelter of Daylight, The Speculative Edge, and elsewhere.  Find more of his writing at J.D. Kotzman