She dropped the shells into the water and prayed it would be the last time. They cupped the surface, tilted, then sank.

Mina watched them with dry eyes. Her heart still cried, but the tears had run dry long ago. The villagers of Fe’aulm gathered around her were not hardened in that same fashion. They wept as Mina danced.

Swaying, she began the Valiance. The movements were barely her own. Trancelike, she spun and dipped across the sand, compelled by the unseen hands of the lostings she was charged with conferring to the Stillplains. They called out to her in mournful whispers only she could hear. Some were familiar. She had no answers for them. She danced on.

The voices drifted off, somewhere across the blue line of horizon to the Next World, the Stillplains, and whatever lay there waiting for them. Her feet came to rest, rough and irritated by the coarse sand. Solemn faces watched her, the faces of those still here, those who had been spared. She felt their guilt. It was heavy, laid upon the beach like a damp cloth. She wished she could send that away, too, but this was a power she did not possess.

All she could offer was whatever solace the Valiance provided, the promise that the lostings had been cleansed and granted safe passage. She sat with them after, as she always did, taking hand after cool hand into her own as she absorbed the tears of those who remained. They asked nothing more of her, but she could feel their strain, their desperate longing for a surety none could grant them. Her expression remained flat, but she was not callous enough yet to be numb to that yearning.

She would leave them tomorrow, when the sun rose again, and her work would continue, by birthright and obligation.

It had frightened her, at first, when she woke to the disembodied whispers of the lostings. She was only a child, but they didn’t care for age. They couldn’t find the path on their own. Even then, she could feel their desperation. She wanted to help them. She tried to reassure them, but she had not been trained.

She learned early what became of lostings that were not conferred. Their worry turned to fear, fear to resentment, resentment to something darker still. They screamed at her, blamed her. She wept, when she still had tears to cry, both for their pain and for her own inabilities. They took shape and returned to the sea, where they coalesced and their bitterness festered, as all lostings who are not conferred do.

This was the cause of all suffering in Benua. The sea grew bloated and swollen with this bitterness until it churned and rose to crash down on the shores and carry back whatever it could clutch in its hateful, foamy fingers. Vales, those of special birth who, like her, could see the path to the Stillplains, were both the salve for the wounds left behind by the sea and the gate against its future violence to come.

As a child, Mina hid her vision, unprepared for the life it condemned her to. She knew of Vales, of their calling, their importance. She was not made for that. She could not carry that weight. She was only a child. It wasn’t fair to ask that of her. So she ignored the whispers of the lostings and buried her gift away, unseen and unnurtured, until the voices were all she could hear.

The calamity came on gray waves soon after. It ravaged her village.

She was one of the few spared. The sea recognized her, hated her, and had left her alive as punishment for her cowardice. She knew that then as she knew it now. The shame was a permanent mark, a wound that still twinged.

A Vale had come days later, as those who remained struggled to dig themselves out from the wreckage of the sea. Mina had never seen a Vale before. Her village, blessedly, had been spared the calamity for years. Until she had brought it down on them. Her and her hidden gift, her secret shame.

The Vale entered their shattered town as a zephyrous breath from the north. The villagers welcomed her with wide, grateful eyes. She was kind and calm, reassuring them with steady clemency. As the Vale danced across the beach, on sands which Mina had once skipped along with her mother and father but were now choked with fallen palms, she heard the whispers of the lostings again. Familiar voices were among them, some more painful than others, two too painful to think of even now. They moved her with touchless hands. She swayed and twirled in a dance of her own until the voices were borne away on warm winds.

The Vale watched her. When it was over, she approached, touched Mina’s shoulders with her painted hands, and knelt. In that lineless face, Mina saw the future she could no longer run from. The Vale left her village the next day, as they always did, and Mina along with her.

She spent her next years learning the Valiance — the incantations, the offerings to the sea, the dance — and had spent each year since performing the ritual down the shorelined edge of Benua, which cut like a narrow knife through endless waters. It was her duty, but also her penance. From the gentle slopes of the northern hills to the black sand banks of southern Melfona, she danced for tearful villagers and for those they mourned, took their hands in her own and prayed, then left them behind. Always, there were more who awaited her.

The sun had gone. Mina watched it disappear as she sat in the white sand of Fe’aulm. She was tired, not just from this day but from all those that had come before. She looked out over the sea, restful now and smooth as onyx, and wondered when it would rise up again.

Was there no end, she asked the waves for what could have been the thousandth time? Was this a punishment that all the peoples of Benua must endure unendingly? She would dance until the sun itself dimmed in the sky if she must, but was there truly nothing else?

Her life was but one in a long line and there were other Vales beside her as well. Yet, the Valiance continued. The dancing never ended. The lostings never ceased their cries.

The villagers of Fe’aulm had brought her what meager meal they could offer. She thanked them for it, but it lay now uneaten beside her. There was a hollowness in her gut, but it could not be filled with fish and fruit.

The voice startled her. Mina turned to find a young girl standing, feet buried in the sand, a few yards from her. Mina softened her face and offered a smile. “I’m always hungry,” she said, “but I can’t always eat.” She held up the broad leaf the villagers had brought her, upon which was a white filet of some local catch and a collection of citrusy fruits. “Help me?”

The girl looked at her, unsure, but a nod from Mina put a smile on her lips and she hurried across the sand to join the Vale. “My name is Lusa,” she said politely as she pinched a soft handful of meat off the leaf and shoved it into her mouth. She spoke around it, spitting little chunks of fish into the air. “What’s your name?”

The girl swallowed and began to reach for another bit of fish before stopping herself. She withdrew her hand quickly and eyed the sand, blushing. “It’s alright,” said Mina with a soft laugh. “Here.” Lusa brightened and took more, eagerly, chewing away with an open mouth as the surf licked at the beach. Mina watched her, wondering how many of this small girl’s family she had conferred earlier that day.

“Do Vales not eat?” Lusa asked. She never paused her chewing to speak.

“Of course. We’re no different than you.”

Lusa shifted her attention now to the fruit, picking up a mooncrest shape and biting into it. Bright juice ran down the corners of her mouth. “Except you can talk to the lostings,” she said as she took another piece.

“No,” said Mina. She turned her eyes back out over the sea. It lay calm, a polished mirror reflecting the emerging stars. “Not quite. They call to me. Sometimes. We do not speak. Not like you and I are now, anyway.”

“Oh,” said Lusa. She had finished eating and was now studying the sand, shifting it with her feet to make little mounds. “I wish I could speak to them.”

They were the words of a child, spoken in innocent earnest. “I do, too,” Mina said and for a time there was no other sound but the gentle surge of the waves.

“Can you teach me?” the girl asked suddenly. She had abandoned her little sand structures and now pulled her knees beneath her to face Mina.

“I cannot. Vales are born, not made.”

“But,” Lusa began, inching closer, “the dance. You can teach me to dance, can’t you?”

Mina shifted. She offered one of her painted hands to the girl, who placed a palm stained with juice onto it. “The movements alone are not the Valiance,” said Mina. “You will not hear or feel them, even if you follow my steps. They are gone, little one. I am sorry.”

For a moment, the girl looked stricken. Mina expected her to pull back her hand to wipe away the moistness in her eye, but instead, she wrapped her fingers over Mina’s painted palm and squeezed. “You’ll leave us tomorrow.” It was not a question. Mina nodded, anyway. “And then you’ll go somewhere else, wherever it happens again, and you’ll dance and the sad people will cry and then you’ll leave them, too. And they’ll pray that they never need to see you again, just like we will, until someday we have to and then it will just start all over.”

“Yes,” said Mina. The word left a bitter taste in her mouth. She wished she had another to wash it away, but none came.

The girl squeezed harder now. “Then teach me to dance.”

“Please,” Lusa stressed. Her cheeks were wet, flushed. “At least then I won’t just be waiting.” The tears came now, but she did not bow her head. Mina placed her spare hand gently across the girl’s cheek. Lusa reached out and did the same. Her touch was warm, welcome.

Mina rose and helped the girl find her feet beneath her in the shifting sand. She extended her arms, upturning her palms toward the sea and stars. The girl watched and did the same.

She dipped. The girl dipped.

And then they were dancing.

For hours, they twirled and glided across a starlit beach, two shapes framed against the featureless horizon. Mina heard nothing, there were no lostings left behind. She had completed the Valiance already, but the halcyon quiet of the night was unique, something new to her. Something pure.

When they finished, Lusa flung her arms around Mina’s waist and embraced her. She hugged back as the long-forgotten sting of salt filled her eyes.

The next day, the sun rose on calm waters and Mina made her way into what remained of Fe’aulm, not away from it. 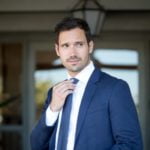 Patrick Shanley is an award-winning journalist and writer of fiction. He recently completed an anthology of short stories and is finishing his first novel. Find him on Substack and Twitter.