I never should have trusted him. Sure, he’s incredible with his fans. Yeah, he’s a genuinely nice guy. Ok, so whatever, he’s one of the most prolific fantasy authors of our time and has the mountain of reviews to prove it.

But I feel so betrayed.

But he’s been just sitting on four full novels and I’m super salty about it. How could you, Brandon? How could you hold out on us?

Well, it looks like I’m not alone in this mixed soup of emotional baggage. From the moment he announced his new novels on YouTube, the Kickstarter campaign has been spinning like the altimeter on a SpaceX booster. It’s now at 104,000 backers and $24,688,5XX — it’s spun up four times since I started this story. So how the heck did that happen?

Well first and foremost, he had the fanbase. And I don’t mean he oopsed his way into legions of adoring fans. Sanderson has been known to go out of his way to attend conventions, sign books, and just generally be a good dude to people who want to meet him or read his books. And I think that is a pretty solid indication of rule one in life: be a good person.

But that’s not the only layer in the parfait. Sanderson has capitalized on a phenomenon that is shaking up the publishing industry as a whole. And that is the idea that authors and readers can have a direct relationship. Think about it; the age of social media is still young.

The ancient houses of Orbit, TOR, Penguin, Random House, Simon and Schuster, and so on are much like aircraft carriers. Once they get going, it’s really hard to turn them. And now that authors no longer need these behemoths to get their words in front of eyeballs, they are abandoning them in full force.

Now don’t get me wrong; the age of sail is not quite over. Traditional publishers still have powerful distribution networks, legions of motivated and talented employees, and the experience to back up their claim on the publishing industry. But they aren’t the only game in town, for readers or writers. So how do we get from where you are to where Brandon Sanderson is?

You make friends with your fans. You write good stories that people enjoy reading. And you run your writing like a business. And if you’re a fan, follow that author’s social media, subscribe to their Patreon, buy your book direct from that author’s store.

So saddle up authors and readers alike, there’s a bold new age of publishing dawning. Write good stories, read and support your authors directly, and we can bring about a veritable cornucopia of incredible alternate worlds and future visions. Lets go! 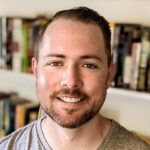 N.T. Narbutovskih is a bestselling author and writes in the tech and security fields. His work has appeared in Metastellar, Air and Space Power Journal and Over the Horizon Journal for both fiction and non-fiction, and he has spoken on leadership and geopolitics at the USAF Squadron Officer School and NavyCON. His first book, Steel in the Blood, has received rave reviews and is available now wherever books are sold. Join his mailing list for exclusive early access and an opportunity to pre-order his next book at Narbutov.com.