If you’re a writer, and want to improve your productivity, you need to track how much you write and how much you edit.

I’m in the process of figuring out my own system. I’m looking for a way to keep track of hours that is enjoyable, that fits in with my current workflow, that’s easy to learn, that is quick to do — something that I will be able to stick with for the long term.

So here are the top options I’m considering.

The old stand-by. I have a bullet journal with dot paper that I’m using for my planning.

For example, below, I jotted down an idea that I had for a sci-fi story based on something I read in the news that day. And on the right-hand side is my plan for the day.

At the beginning of each month, I do a plan for the whole month.

I can easily add a word count tracking column to that.

I also create a weekly log every Sunday. I currently use that to track the hours I spend at various tasks, but I can add word counts, or stop tracking time and start tracking word counts instead.

The upside to doing it this way is that there’s no learning curve. Plus, it’s very satisfying to write something down with pen on paper. Plus, I love color-coding.

For example, if I didn’t decide to make an article out of choosing a word count tracking system, I’d be making a pros-and-cons list in my bullet journal.

To use this approach, I would have to remember, every morning, to note how many words I’ve got so far. Then, at the end of the day, I’d need to look at my current word total and calculate how many new words I’ve written that day, then write it down. That might require finding my journal. If I have to hunt around for it, I might forget to track the word count that day, and would need to do it the following day.

If you don’t have a journal, you could also use your planner, a chalkboard, the side of your refrigerator, or scratch marks on a wall, prison-style.

I’m a big fan of Google Sheets, the free spreadsheet app that comes with Google Drive.

It’s trivially easy to set up a spreadsheet where you can add each day’s word count. 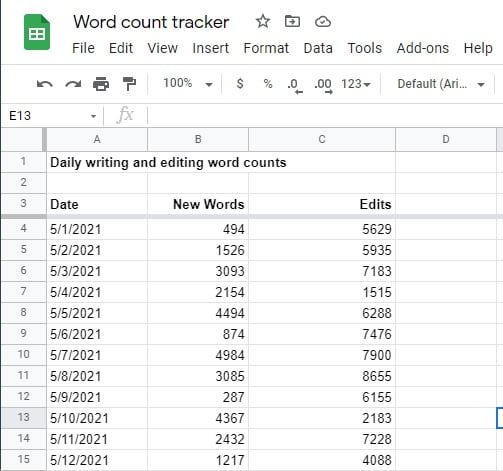 And if you like to play around with formulas and charts, you can use filters and formulas to create summary reports.

Those are random numbers in the charts above — I haven’t started tracking my word counts yet!

To use this system, I would probably have to add a couple of extra columns — word total at start of day, word total at end of day. And then use a function to do the calculation of how many new words I’ve written.

I would also have to remember to open the spreadsheet document, which would mean bookmarking it on my — already crowded — bookmarks bar.

You can also use a word processor to keep a list of word counts, or a Notepad, or a note-taking app like Evernote or OneNote, or your calendar app. These won’t have the ability to create charts, though.

Scrivenever is the tool of choice for today’s novelist — and it has a built-in word count function and will tell you how close you are to your goal.

You can read about how to use it in their instructional blog post here, or watch the tutorial video below.

You still have to write down the totals somewhere, like in your journal, a spreadsheet, or a word count tracking app.

That seems like a big lack in the software.

I’ve long been considering switching to Scrivener — the $50 price tag is pretty reasonable — but the fact that it’s desktop-based rather than cloud-based is a minus. I use a laptop, a desktop, and a smartphone to do my writing, and would prefer whatever platform I pick next to be cloud-based. But if Scrivener had a built-in tracking system I might give it another look.

Novelist, available for both Android and iOS, is like the mobile equivalent of Scrivener.

You can keep track of your story outline, characters, themes, events, locations, props, and more, and actually write your book right in the app.

Well, I guess you’d probably dictate, since I can’t imagine anyone actually typing a whole novel on a phone’s keyboard.

The app has been downloaded more than half a million times and, according to the developers, currently has 75,000 active users.

It also has nearly 4,000 reviews in Google play, with an average score of 4.2 stars. But it seems to be new to iOS, with just three ratings.

It’s not cloud-based, but you can export your book by compiling it into a ePub, ODT, or HTML file and keep a copy of it in the cloud. So, say, if you wanted your writing group to take a look at a particular chapter you could export it as ODT, import it into a Google Doc, and share it there. There’s also an option to write on the web, if you want to use a computer for the bulk of your writing. You use it by going to web.novelist.app and pointing your phone at a QR code on the screen. That’s a little clunky. Most apps just have you log in to the website instead, and save your progress in the cloud across all your devices. The developers also warn that the site could go down at any moment, and writers should backup often.

Novelist does let you set goals and track your progress. I installed it on my phone, but couldn’t figure out how to do a daily word count with it and track historical stats. I think it might be like Scrivener in this respect — it can give you the total, but if you want to see daily progress, you’ll need to track it elsewhere.

So I wouldn’t be using it for several reasons — the lack of full web support, the lack of good daily word count tracking, and the fact that I already have a system in place to organize and write my novels.

But, on the plus side, if you’re looking for a way to organize your novel, and you primarily work on your phone, Novelist is completely free.

You can watch a quickstart tutorial for the app below.

This is a free app, available for Android only, that helps you build your world, plan your story, and organize characters, settings, and more. Plus, it lets you create your goals and track your progress in words, or hours, chapters, scene edited — any way you want.

One downside is that it doesn’t have a website. It would be nice to see everyone online as well as on my phone, especially since it’s a bit easier to type on my computer. 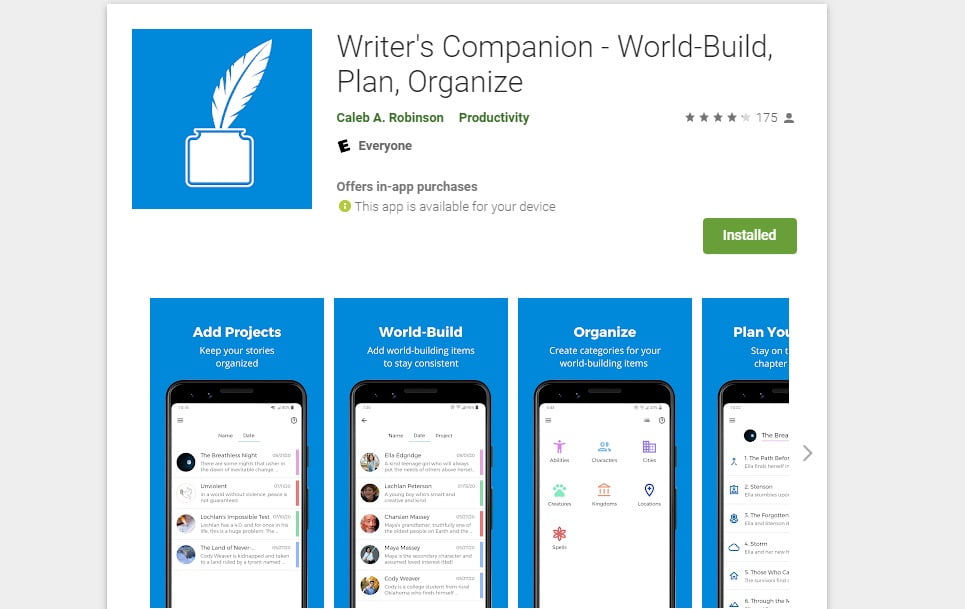 This is a nice system.

If you have an Android phone, and don’t currently have any kind of story planning system in place, you should try this out. And yes, typing on a phone is annoying — but you can dictate! And you know you always have your phone with you, so whenever you have an idea for something you can add it in.

Could I use it? In theory, yes.

But in practice, I already have a story planning system set up, so I’d only be using it for the word tracking, and there are better apps for that one piece of it.

Plus, the lack of a website is a problem for me. But it might not be a deal breaker for other people, especially considering that it means that you have full privacy for your data — hackers can’t break into the system, read your work in progress, make fun of it, and ruin your motivation forever.

A similar, though prettier, app called StoryPlanner is available for the iPhone for $4.99 and the Mac for $9.99. I’d try it out, except that I have neither device.

Writer Tools is a novel planner and progress tracker. It’s supposed to have an online website to go with it, but the site doesn’t load for me. Plus, you have to keep hitting the save button inside the app — it doesn’t save your changes automatically. And it only keeps a single backup.

You can add images to your notes, but you have to watch an ad each time you do it.

The pro version costs $4.99 a month and includes exports, a night mode, a complete backup history, and removes ads.

It lets you create timelines for your stories, organize notes about locations and characters, save ideas, and create custom lists.

And you can write your book right in this app. Once you’ve written it, you can export the whole thing or specific chapters in PDF or TXT format. You can also export your character profiles.

Plus, most importantly for the purposes of this post, it tracks your writing progress, both in terms of the time you spend writing and how many words you do, and lets you set writing goals. Nice! It takes a little effort to figure out how to use it, but I do like the daily writing log very much and the progress stats.

It’s only available for Android. Since the web functionality is a little wonky, I’m not going to use it, but if you don’t need the web piece, give it a shot if you’re the kind of person who wants to write their novel on their phone.

Using a mobile habit tracking app is like using a journal, except that I wouldn’t have to hunt around for my phone. It’s never out of arm’s reach!

This could work for me. I already use LoseIt on my phone to track calories and carbs and blood pressure. I previously used FitnessPal and, before that. the Atkins app. All three are free, and I’ve been using one of these apps daily for more than three years — and lost more than 100 pounds. So yeah, these kinds of apps work super well for me. And I recently upgraded to the premium version of LoseIt in order to add sodium tracking, and I’m fine with paying a little bit for extra functionality.

So one of these apps could be a good fit for me.

Plus, they have pretty graphics.

Here are some apps, ranked in descending order of popularity: 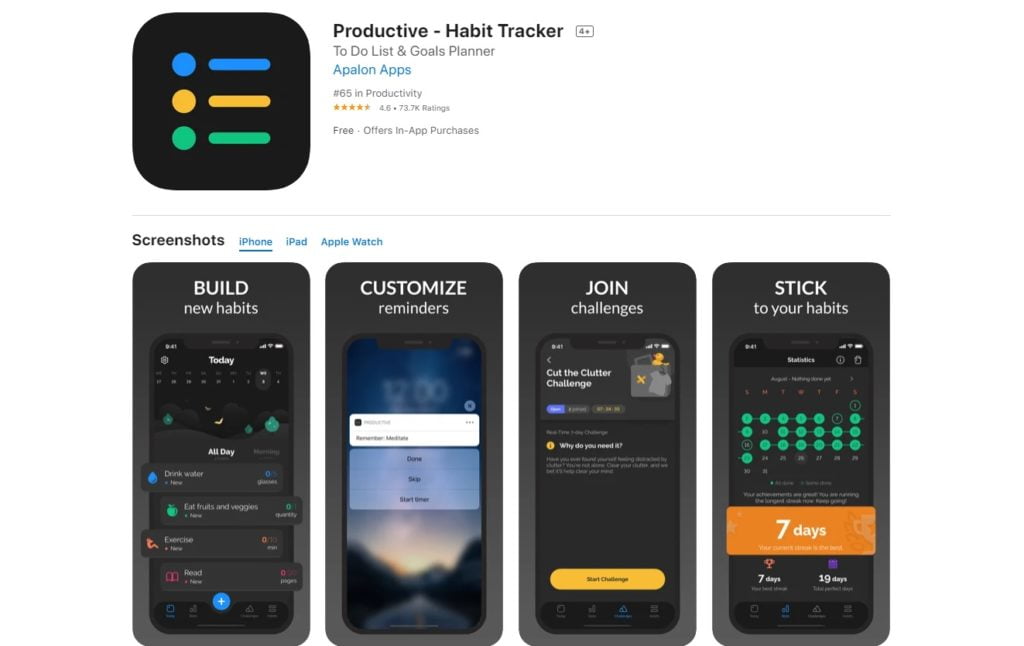 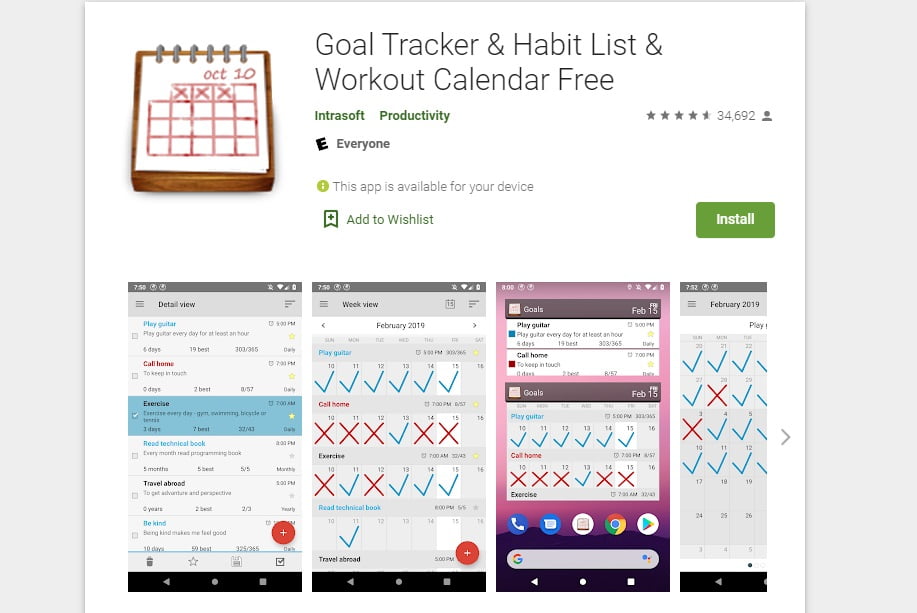 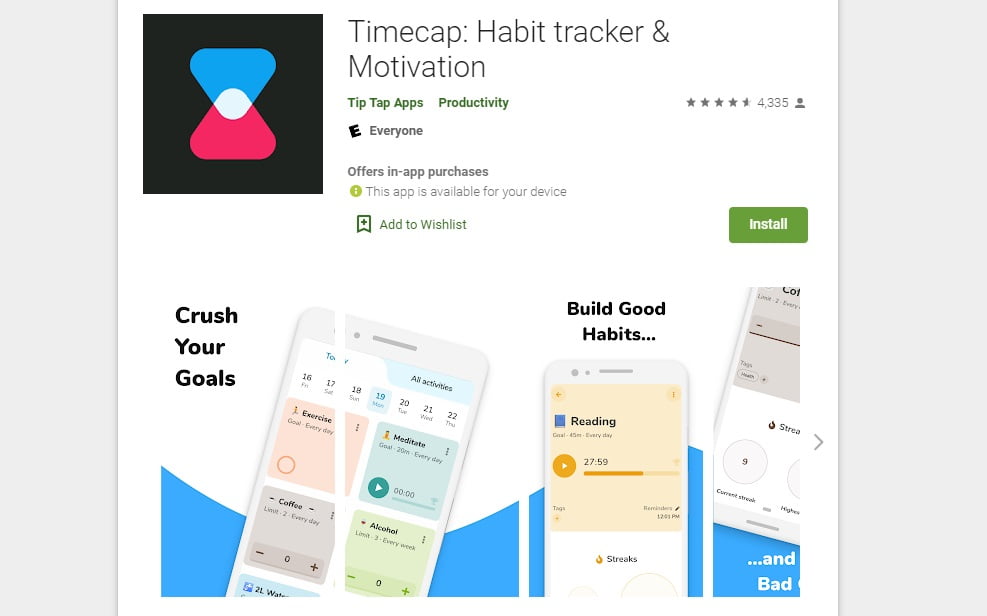 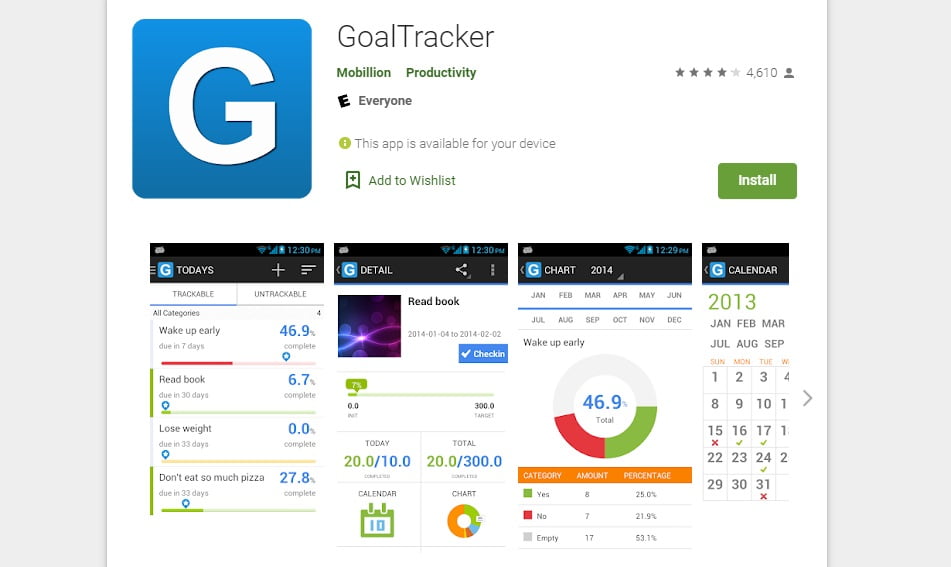 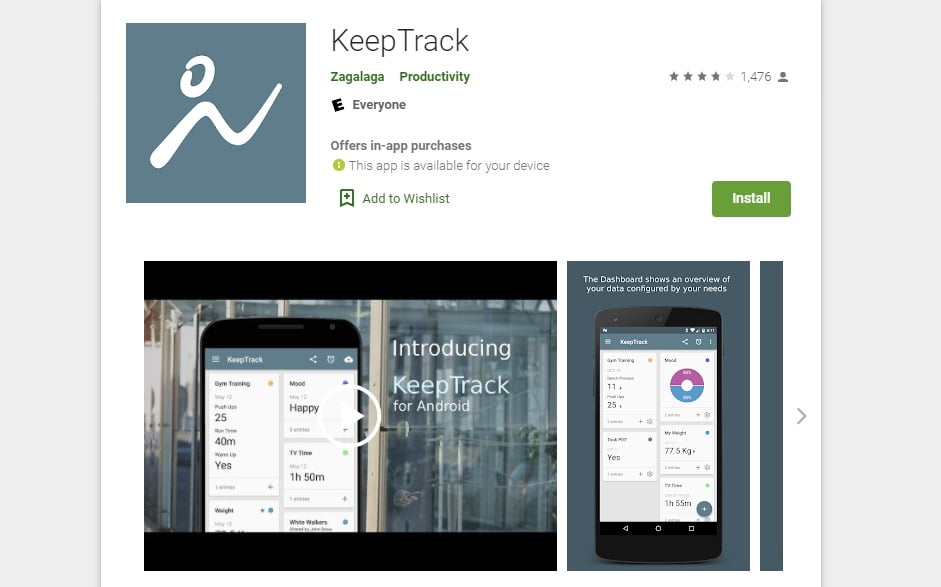 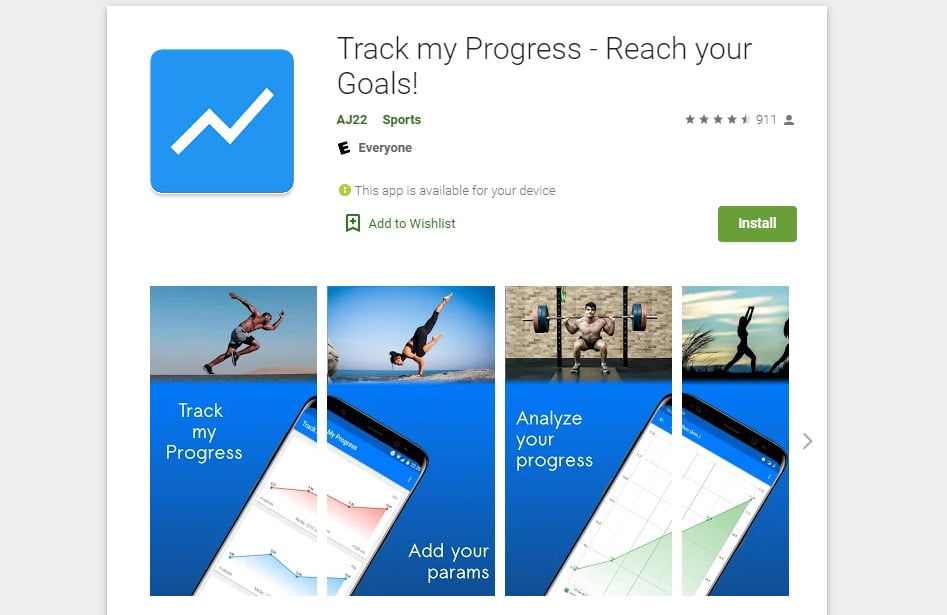 So what I’m going to do is add this functionality to the database I’m currently using to write my novels. It’s basically a home-grown version of Scrivener.

At some point, something better will come along and I will migrate to a commercial platform, but, right now, nothing out there has everything that I need, so I’ll stick with what I’ve got, even though I’m missing some key functionality.

Scrivener and Novelist — I would use you if you had better web support. And if you could add a time and word count tracker while you’re at it, that would be great.

5 thoughts on “How to track daily word counts”