Sonic the Hedgehog 2 is a Sonic fan’s dream, with heavy action scenes, as well as winks and nods to the franchise’s history.

Not only does Sonic the Hedgehog 2 easily pass as a fun video game movie — it’s also a story about growing up.

Sonic is trying to be a big hero. However, he has to learn that he still has a lot of maturing to do and needs to take responsibility for his actions — because with extraordinary abilities comes accountability — or something like that.

Some things are a lot better than they have any right to be. That includes the first Sonic the Hedgehog movie from Paramount Pictures, released in February 2020.

Based on the popular video game franchise from Sega, it was initially scheduled for a Thanksgiving 2019 release, but it faced backlash for the teaser’s nightmare Sonic design, which didn’t really look like Sonic.

This prompted Paramount to delay the movie release to revamp Sonic’s design. The end result was something of a miracle.

Sonic the Hedgehog was not only a video game movie that was actually decent, but it was also a cute, endearing family film.

Two years later, Sonic is back at it again, and the second run is almost on par with the first. 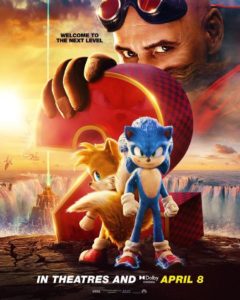 Sonic the Hedgehog 2 does hit a couple of speed bumps, including some clunky dialogue.

The characters often give whole exposition dumps when it could have felt a bit more natural.

The argument could be made that the movie was made for children, but they can figure things out without all the explanation.

Jim Carrey’s Doctor Robotnik is back and he’s on a quest to obtain the Master Emerald, a sacred relic that’s connected to the history of Sonic’s late adoptive mother, Longclaw the owl.

Jim Carrey easily steals the show as Robotnik. He has a blast in his villainous role, overacting with all his cartoonish mannerisms.

This time, Robotnik has help from the red echidna, Knuckles, who’s voiced by Idris Elba.

Knuckles is the perfect foil for Sonic, with Elba giving a performance that is so serious it is hilarious. The two of them bounce well off of each other and end up in a fight that is worthy of any video game boss battle.

The movie also brings back Tails, the two-tailed fox from the end credits scene of the first movie, who’s voiced by Colleen O’Shaughnessey.

There are some cute moments from Tails, who acts as an adorable little brother type and fanboy to Sonic, whose adventures he watched from his home planet. Tails sees him as a fellow misfit that gives him hope that he can do great things as well.

Also returning are James Marsden and Tika Sumpter as Sonic’s surrogate parents, Tom the Donut Lord and Maddie, respectively, who go to Maddie’s sister’s wedding and leave the house to Sonic for the weekend. Of course, that doesn’t go wrong.

The movie overstays its welcome just a little, and the climax does feel a little drawn out. Just when the movie should end, it turns out there’s another phase of the final fight.

There is, however, a mid-credits scene that is an immense payoff for long-time fans of Sonic who want to know what the future has in store for the blue blur.