Carey proposed to Harold on his twenty first birthday. Even though he was madly in love with her, he hesitated to answer. He was old fashioned and believed it to be the man’s prerogative to do the proposing. He answered yes, but not sure about the next move, he smiled and kept silent. Carey explained the many ways she loved him and how she’d take care of him all through his life. Adoration reflected in his brown eyes as he listened intently, savoring every word that poured from her thin sharp lips.  “You’ll never have to work honey, you could do whatever you want whenever you want. Life will be one long holiday.  All your needs and desires would be met.”

“That’s a tall order sweetheart. I’ve got some very unsavory needs. Are you sure you know what you’re getting yourself into?”

They were walking hand in hand on the sea front, but he felt spikes going through him. He didn’t say a word. Just listened to the sound of her voice that was so melodious as to be hypnotic. He didn’t notice that time was moving.

He walked through the heavy front doors into a high ceilinged long hallway and then he was in their bedroom. A high canopied bed nestled in the middle of it. A few feet from the floor.

He asked, “Honey? What’s wrong with the bed? Did you install something underneath to make it higher?”

“No sweetheart it’s always been this way.”

“No dear.” She answered. “We go to bed like always. I lift you up. And take you down every morning.”

“What?” His head swiveled of its own accord. Eyes opened as wide as saucers.

“Honey we can’t live this way?”

“Why not? We’ve been doing this for thirty five years. Has something changed?”

“What? What do you mean thirty five years? You just proposed to me about thirty five minutes ago!”

He swung around again and was facing a mirror. That reflection portrayed a potbellied grey-haired old man with sideburns. He froze then reached to touch his face, but was interrupted by a knock on the door. He swiveled and was greeted by a teenager with soft milky white skin, and eyes that told a story of age and weird wisdom. Hard and cold. She brought in sandwiches on a tray.

“Here’s your lunch children. Your favorite. You really do look as handsome today as you did when you first got here Harold. You age quite well indeed.”  She turned to walk out, when Harold noticed that she was gliding.

“Carey honey, What do you say we go out on the town tonight? It feels like ages since we’ve been out.”

“Nonsense. We have our weekly gatherings and you always have such fun.”

“Oh yes. It momentarily slipped my mind. Where did we go last weekend? Remind me.”

“The Gathering. Just said. At the Savannah? Next to the silk cotton tree?”

“Now I remember. Where everyone wears those clothes from the Victorian era.”

“Yes. And you always comment on them because you find them so attractive.”

“Excuse me. Carey? May I speak to you for a minute please?” The girl interrupted and got a rebuke from Carey.

“We are having a conversation. Can’t it wait?”

“No.” Answered the teenage girl. She walked out, followed by Carey. “How rude!” Whispered Harold.

Outside of the bedroom Carey asked, “What is it, Mother that can’t wait a few minutes?”

“Don’t be daft. Haven’t you noticed his questions? And he’s seen how he’s aged and thank the moons he doesn’t yet know that I am your mother. When he realizes that we’ll be finished.”

“Nonsense. That will not happen. I’ve sworn that he’ll pay for what he and his family have done to me and he will. He is paying. There is no escape. You shut your mouth.”

Carey returned and got Harold’s party clothes from the wardrobe. Realizing that her mother was right, she placed Harold on the bed with a wave of the hand. He was out of the trance that he’d been in for the past thirty five years, but confused as he was, all he could muster was “What have you done to me?”

Carey removed the scarf from around her neck, and her age was revealed.

“I’m glad you remember. You and your family made it so me and my family would never succeed in whatever we do.”

“I had nothing to do with that. I tried to stop them.”
“Doesn’t matter now. Only my mother and I survived your attack. So it’s magic for magic. Now that you’re free, you can leave.” Carey sprinkled some powder around the room, and the last veil was removed. Harold now saw the dump in which he was living. He held his hand to his mouth as something in his stomach started growling and threatened to burst forth. He jumped across what he supposed was his bed, a filthy raggedy mattress and made it to the small window where he vomited something stink and slimy. There was no water around so he wiped his mouth with his shirt, that made him vomit again. Carey meanwhile stood there watching him with so much hatred that he felt cold all over.

“Why didn’t you just kill me?” He asked.

“Because you’d be dead. This way your parents suffered each day as I paraded you in the village.”

“Like I said. Magic for magic. My magic is better than their magic. They took everything from us. There was nothing to lose. See what they did to my mother? She’s been that age for forty years.”

The villagers clapped and thanked her for their freedom when she finally dropped Harold home. 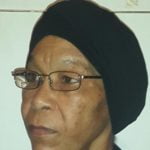 Soter Lucio is a great grandmother who does ironing for a living and writes horror at night. She lives alone and her hobbies are reading and writing. She's been published by Sirens Call, Weird Mask, Dark Chapter Press and Migla Press. She can be found on Twitter @JanSoter and on FaceBook at Soter Lucio.