Ahh, the rituals of Autumn. Shorter days, cooler weather. Stew simmering in the crockpot. Fleece and flannel and pumpkin spice everything. Even better: Halloween is looming at the end of the month, promising an evening of fearsome fun and fright-filled mayhem. Break out the popcorn and crack open a cider or two—what better way to enjoy the month of October than with a terrifying horror film?

Except—where to start? Scan the horror selections on your favorite streaming service and you’ll find zombies and vampires, killers with gleaming knives and ghosts inside haunted houses, planet-ransacking aliens and monsters with giant chomping teeth. Out of this tangled tapestry of terror, a few films rise to the top, flickering and gleaming in their horrible majesty like the oppressive and ever-watchful eye of Sauron.

Without further ado, I present to you my list of the top 6 scariest movies of all time. Each of these has made a huge impact on me in their own way. Together, they’ve wrecked my view of reality and contributed to many sleepless nights. Watch them if you dare. I sincerely hope they terrify your socks off. 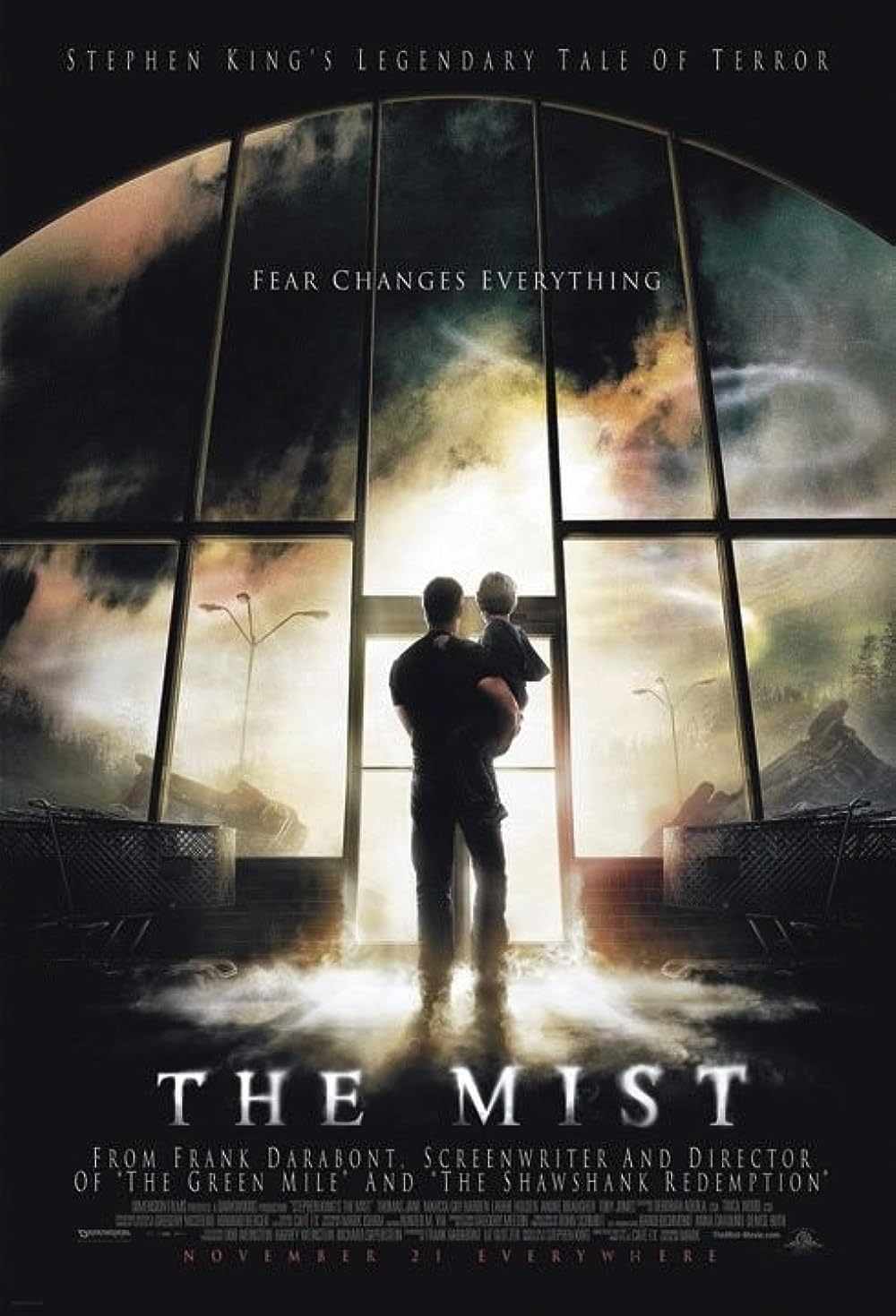 The Mist is included here for several reasons: It’s based on one of my favorite Stephen King stories ever, and director Frank Darabont did a spectacular job bringing the story to life. A strange mist descends over a small town, trapping a group of shoppers inside a grocery store. Of course, the mist is brimming with all manner of monsters that creep and crawl and fly and basically want to eat everyone who ventures outside. To make matters worse, a group of religious zealots inside the store is out to cause trouble. Thomas Jane delivers an earnest performance as a father who finds himself stuck between a rock and a hard place trying to protect his son from the horrible events. As in King’s novella, the monsters are Lovecraftian monstrosities out of your worst imaginings, and they kill in the most frightening and disturbing ways. But the real reason I’ve included The Mist is because of it’s a jaw-dropping finale, a walloping double nightmare that — while deviating from the book — still managed to leave me stunned. 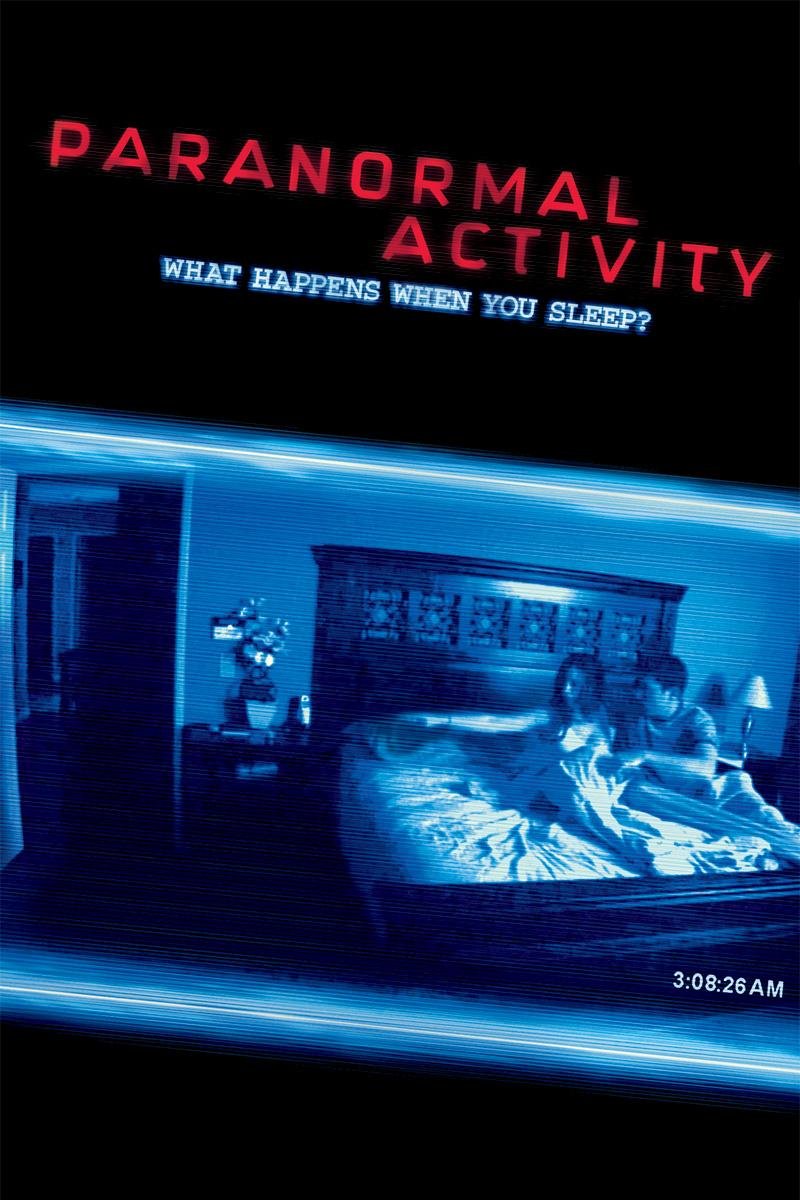 Even though Paranormal Activity was made on a budget, that didn’t stop it from scaring the bejeezus out of a global audience and sparking a franchise that would crank out many more films over the years. Plagued by a supernatural force, a young couple installs cameras in their house to try to figure out what’s haunting them. For a ‘found footage’ film with minimal special effects, Paranormal Activity delivers tons of scares without revealing too much of the horror along the way. The acting is pretty decent and there are enough creaks and thuds and slamming doors to keep you feeling unsettled and hooked by the story. The ending only delivers a glimpse of the entity that’s haunting the couple, but nevertheless it’s a moment that’s drenched with tension, milking the scares for all its worth. Even today, I get chills when I think about those footprints in the flour on the floor. Brrr …

The Ring is an American film based on the Japanese horror film Ringu, which was a tremendous success in its own county. In the U.S. version, a journalist played by Naomi Watts investigates a cursed videotape — remember those things, kids? — that kills anyone who’s seen it in seven days. Watts is a capable actress, and it’s a thrill to watch her character search for answers while the circle of evil envelopes her loved ones … well, sort of like a ring. Ahem. The mystery of the videotape itself is compelling on its own even before the bodies start to drop. Then we meet ghostly Samara, a villain worthy of our fear and admiration. The special effects in The Ring broke the mold when it was released, bringing howls of fright from audiences, and earning the film almost $250 million worldwide. Now almost twenty years later, The Ring — and especially the footage on the cursed videotape — will leave a deliciously creepy aftertaste in your mouth.

This movie plays on the audience’s sympathy immediately by thrusting the protagonist, Sarah, played by Saundra Macdonald, into a terrible situation when she witnesses the death of her husband and daughter in a horrifying car accident. After a year of grieving, her longtime girlfriends decide to rescue her from her despair with an adventure, just like they used to do when they were younger. The group sets out to explore a remote cavern in the Appalachian Mountains, and even though they are well-prepared, disaster strikes when a passage collapses behind them. This is a horror film, after all. The women find themselves trapped and lost inside the darkness of a sprawling cave system, which, unbeknownst to them, is also inhabited by a race of cannibalistic creatures who can see all too well in the dark. Part Indiana Jones and the Temple of Doom with dashes of Cliffhanger and The Poseidon Adventure thrown in for seasoning, The Descent is a claustrophobic — and quite bloody — horror fest all the way to a knockout punch of an ending.

Visceral. Atmospheric. Terrifying. Just a few words to describe The Witch. A family of Puritan settlers relocates to the woods of New England and find themselves prey to an unspeakable evil. For a horror flick, this period piece is a bit of a slow burn. Scenes are almost painfully quiet, and the action moves slowly. Nevertheless, the debut film by director Robert Eggers is captivating and truly frightening. Eggers teases horror out of the setting, which is rich with details of life on the frontier in the 1600s. Even the characters’ archaic language — “thee” instead of “you”, “thine” instead of “yours” … you get the picture — puts you in a strange and unfamiliar place. The scene with the young floating Caleb will stick with me forever, and Thomasin’s decision at the end is as tragic as it is inevitable. Let’s not forget Black Philip! Holy mother of God, a farm goat hasn’t been this scary since Drag Me to Hell. Well done, Eggers and crew.

This directorial debut by Ari Aster is horror tour de force, earning him a forever spot in my spooky little heart. Hereditary is creepy all the way through in so many ways. Toni Collette gives an unbridled performance as a frantic mother whose family becomes haunted by an evil presence after the death of her secretive mother. The pacing is tight and tense, with a brilliant plot twist in the middle that sends the movie spinning off in an unexpected direction. The last twenty minutes are some of the most gripping, weirdest moments I’ve ever seen in a horror film. In fact, there’s so much horror stuffed into this movie, it took my brain a few days to unpack it all. Multiple viewings are rewarding as well — you’ll notice terrors hiding in plain sight that you overlooked the first time. The score by Colin Stetson is the perfect complement, almost as unnerving and innovative as the film itself, adding compounding notes of menace and dread throughout the film. And the final scene and the horrible implications it brings … man, oh man! Adios, sleep. Hello, insomnia.

Robert Stahl is a former bartender who left his bottle opener behind to follow his dreams as a writer. Now the Dallas-based freakazoid writes advertising copy by day and fiction in the evenings. He loves to connect with others about the craft of fiction. Click the link to find his blog as well as links to some of his stories: robertestahl.com.